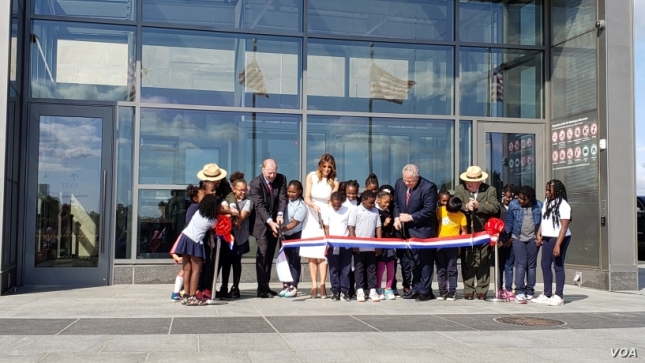 The Washington Monument reopened to the public Thursday after years of closure to replace its aging elevator and security system.

First lady Melania Trump helped with the ribbon-cutting ceremony and took a ceremonial first ride to the top of the monument with fourth-graders from nearby Amidon-Bowen Elementary School.

The iconic landmark in the nation’s capital has been closed for most of the past eight years, after a 5.8 magnitude earthquake left 150 cracks in its stones in 2011.

The monument briefly opened in 2016 but closed again after a series of elevator malfunctions.

“We completely rehabbed the elevator,” said Jeffrey Reinbold, National Mall and Memorial Parks superintendent. “There’s new cabling with it, new electronics with it; we refurbished the motor with it. And we also added a new screening facility.”

Reinbold said the number of visitors would be limited initially to 40 to 50 people every half-hour until officials determine the best flow for the security screening system. He said they hoped to return to the previous average of about 500,000 visitors per year.

People lined up from the early hours of Thursday morning to get tickets that were available on a first come, first served basis.

Josephine Griffin, an au pair from France, said she was happy to spend one of her last days in Washington visiting the top of the monument. “I have to go back to France and this is such a great goodbye,” she said.

Jennifer Strauss, from Utah, said she was excited to be one of the first few to try the new elevator. “I’ve seen a lot of other things in the city; this is the one thing that was on my list,” she said.

The Zhangs, a couple from Shanghai, China, did not have tickets and walked around for an hour asking for them. They did not speak English but carried a handwritten sign that said their ancestors had donated a stone on the 10th floor of the monument.

Jill Chestnut from Dallas, Texas, helped them out. “They were very persistent,” she said. “They really wanted to get up there and I had two extra tickets.”

speaking through an interpreter. “Everyone here seems to admire their American history and heroes. I think it’s a great spirit.”

According to the National Park Service, 193 commemorative stone tablets are set into the interior walls of the monument. One of them was set at the height of 67 meters and donated by the American Mission in Ningbo, China.

Online reservations for tickets to the monument can be made beginning Oct. 19.

The monument’s repair was funded not only by taxpayer money but also with millions of dollars in donations from philanthropist David Rubenstein and others.

The National Park Service is hosting a variety of events to celebrate the monument’s reopening.