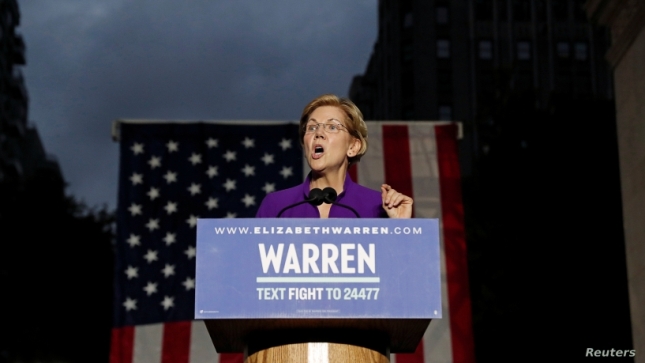 Harris has been losing steam in recent polls after she had a brief bump following the first Democratic candidates debate in June.

Biden and Warren were the only two candidates to gain significant support in the latest NBC News-Wall Street Journal poll, an increase from an earlier survey done in July.

The energy associated with Warren’s campaign was on display this week in New York City, when she drew an estimated 20,000 people to a rally where she promised to root out corruption if elected next year.

“Corruption has broken our economy and corruption is breaking our democracy,” Warren told supporters. “I know what is broken. I have got a plan to fix it, and that is why I am running for president of the United States!”

Warren has been rising in the polls for months and has now emerged as the top challenger to the front-runner, Biden.

Biden also was back on the campaign trail this week with a stop in Miami, Florida.

Biden consistently targets President Trump in his remarks, well aware of polls that have shown he would be the strongest challenger to Trump in next year’s election.

All the candidates are back on the campaign trail after last week’s spirited debate in Houston.

During the debate, New Jersey Senator Cory Booker urged his rivals to temper their attacks on each other.

“We have got one shot to make Donald Trump a one-term president, and we cannot lose it by the way we talk about each other or demonize and degrade each other.”

Analysts note that there has been little change in the top ranks of the Democratic challengers after three debates, with Biden, Warren and Sanders leading the pack.

“The ultimate thing you want to know, though, out of these debates is, did anybody change their standing? And I think among those three candidates, the answer is probably not really,” said Associated Press Washington Bureau Chief Julie Pace.

So far, Biden appears to be doing just enough to hold his lead, according to University of Virginia analyst Larry Sabato.

“Joe Biden did reasonably well. I think he did better than in the first two debates,” Sabato told VOA via Skype. “That is not to say he gave a perfect performance. He always manages to work in some odd things like encouraging people to listen to their record players.”

Sabato added that Biden continues to benefit from the notion that he would be the strongest Democrat to take on President Trump next year.

“There is a reason why they [Democrats] have made a tentative choice. Democrats have clarified their entire nominating process and boiled it down to one question: Who can defeat President Donald Trump? That is what they care about.”

Even though Sanders and Warren are battling for second place, Warren has been the one on the rise in the polls, as evidenced by the latest NBC News-Wall Street Journal poll.

“The challenge for Sanders is that there is a viable, additional option in Elizabeth Warren,” said Emory University political scientist Andra Gillespie. “And so I think what we are paying attention to now in these surveys is whether or not Elizabeth Warren’s ascendance is actually coming at the expense of a Bernie Sanders. And so I think that is still an open question.”

According to various accounts, President Trump appears to be keeping a close eye on the Democratic race and frequently weighs in with assessment and comments.

During a recent rally in Fayetteville, North Carolina, Trump was generally dismissive of the entire Democratic presidential field.

“You don’t have any choice, you have to vote for me,” Trump told the crowd. “What are you going to do? Put one of these crazy people running our country again?”

Democrats hold their next debate in October in Ohio, and it appears there will be more than 10 candidates, likely meaning two nights of debates.

Billionaire environmental activist Tom Steyer has met the qualifications for the fourth debate, joining the 10 Democrats who were on stage in Houston earlier this month.