Pompeo: Trump Correctly Called Off Taliban Talks Because of Its Terrorist Attacks 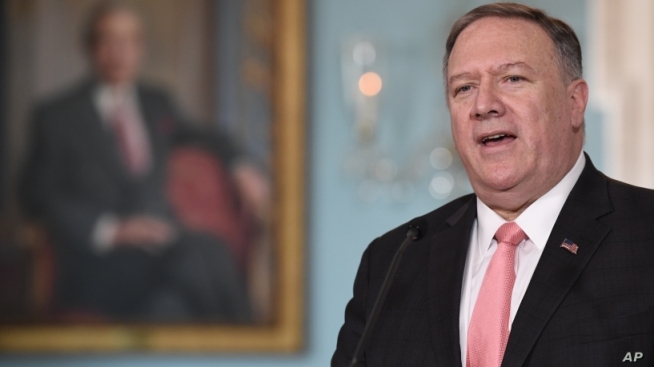 U.S. Secretary of State Mike Pompeo said Sunday that President Donald Trump “made the right decision” to call off peace talks with Taliban leaders at his presidential retreat because of the terrorist group’s on-going attacks in Afghanistan.

“We need to see them capable of delivering on their promises” to end violence in the war-torn country before they are “rewarded” with a meeting with Trump, Pompeo told CNN. He made no commitment on whether or when peace talks would resume.

The top American diplomat said Trump’s planned Sunday meetings at his Camp David retreat outside Washington with the Taliban and Afghan President Ashraf Ghani, albeit separate talks with each, were set in the belief that they “could further America’s national interest” to end the 18-year U.S. involvement in Afghanistan.

Negotiators for the U.S. and Taliban have held nearly a year of peace talks.   U.S. chief negotiator Zalmay Khalilzad last week said his team of negotiators had drawn up a draft framework agreement that, if approved by President Trump, would allow 5,000 American troops to leave five military bases in the country within 135 days.

Pompeo said Khalilzad has been told to return home.

The longest war in American history started with U.S. military efforts to wipe out al-Qaida terrorist training grounds protected by the Taliban that were used to launch the 2001 terrorist attacks on the U.S. that killed nearly 3,000 people, with the 18th anniversary of the attack coming up on Wednesday.

Trump disclosed the Camp David talks, which he said were “unbeknownst to almost everyone,” as he called them off, following a car bomb blast in Kabul last week that killed 12 people, including a U.S. soldier.

But his attempt at brokering a final accord with the Taliban at Camp David was not without controversy.

Republican Congressman Adam Kinzinger, an Air Force pilot who served in Iraq and Afghanistan before winning a seat in the House of Representatives, said on Twitter, “Never should leaders of a terrorist organization that hasn’t renounced 9/11 and continue in evil be allowed in our great country. NEVER. Full stop.”

In an interview on Fox News, Pompeo was asked whether it was appropriate to invite the Taliban to meet three days before another anniversary of the 9/11 attacks, but he deflected the question about the timing.

He said “lots of bad folks have come through” Camp David over the years. He said Trump made the decision for the meetings, quoting the president as saying, ” I want to talk to President Ghani. I want to talk to the Taliban negotiators. I want to look them in the eye. I want to see if we can get to the final outcome…. So we found that arrangement acceptable.”

Trump, on Twitter, said the Taliban had carried out the attack “in order to build false leverage” at the talks. But he said if the Taliban “cannot agree to a cease-fire during these very important peace talks, and would even kill 12 innocent people, then it probably doesn’t have the power to negotiate a meaningful agreement anyway. How many more decades are they willing to fight.”

Trump said Ghani and the Taliban leaders had been planning to travel to the United States Saturday night.

While Trump has vowed to end U.S. involvement in Afghanistan, Pompeo said, “We’re not going to just walk away, if it’s not right” for American security interests in protecting against terrorism.

“If the Taliban don’t behave, if they don’t deliver on the commitments that they’ve made to us now for weeks, and in some cases months, the president is not going to reduce the pressure, we’re not going to reduce our support for the Afghan security forces that have fought so hard there in Afghanistan,” he said.

The Taliban said that U.S. military forces in Afghanistan “will suffer more than anyone else” from Trump’s abrupt cancellation of the Camp David talks.

The Taliban said the U.S.’s “credibility will be harmed, their anti-peace stance will become more visible to the world, their casualties and financial losses will increase, and the U.S. role in international political interaction will be discredited even further.”

Even with the initial goal of attacking the al-Qaida training grounds, the Afghan war has dragged on for years, with nearly 2,400 U.S. military personnel killed and more than 20,000 wounded in action.

The U.S. currently has about 14,000 military personnel in Afghanistan although Trump has vowed to sharply draw down that force.

But with Trump’s cancellation of the Camp David meetings, the fate of the tentative peace agreement that had been reached between the U.S. and the Taliban is in question. The Taliban said it had agreed to hold intra-Afghan talks with the Ghani government on September  23.

After Trump called off the Camp David meetings, the Afghan government said it remained “committed to working together with the United States and other allies to being a lasting peace.”