4 Dead, Dozens Missing After Fire Broke Out Aboard Dive Boat Off California Coast 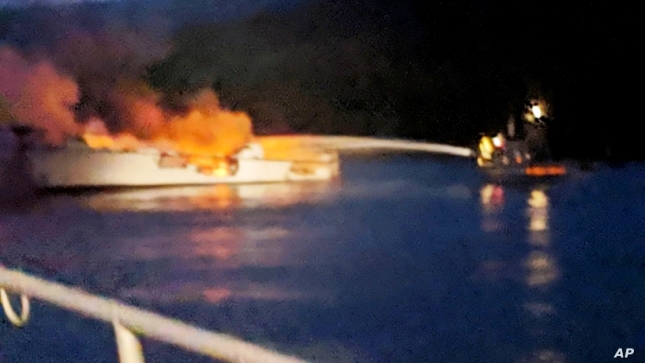 The U.S. Coast Guard says at least four people are dead and more than two dozen others are missing and feared dead after a fire erupted aboard a dive boat off the coast of Southern California.

Coast Guard officials said five crew members were rescued after the fire broke out on the 20-meter commercial dive boat, called Conception, which was anchored near Santa Cruz Island off the coast of Santa Barbara.

They said they are searching for other passengers who have not been accounted for.

An image posted by the fire department showed the dive vessel engulfed in flames. The Coast Guard later said the fire had been extinguished and said most of the boat had sunk in 20 meters of water with just the tip of the bow above the water’s surface.

The Conception was on a Labor Day weekend cruise taking divers to the Channel Islands off the coast of Southern California. The vessel was chartered by Worldwide Diving Adventures, a Santa Barbara excursion company.