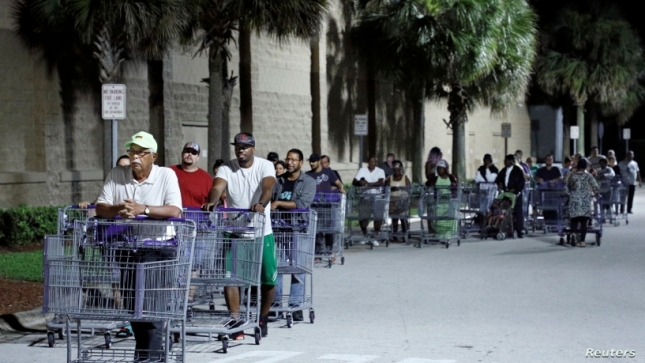 “Dorian is likely to remain an extremely dangerous hurricane while it moves near the northwestern Bahamas and approaches the Florida peninsula through the weekend,” the center said.

Florida Governor Ron DeSantis has declared a state of emergency for the entire state, paving the way for the deployment of National Guard troops if necessary and the provision of more fuel. The Bahamian government issued a hurricane watch for the northwestern Bahamas.

Dorian is moving with maximum sustained winds of 165 kilometers per hour.

Forecasters predict that Dorian could slam into southeastern Florida early Monday as a Category 4 hurricane with winds of at least 209 kilometers per hour.

Category 4 storms are capable of what experts describe as catastrophic damage — destroying homes and stores, ripping up roads, and knocking down trees and power lines.

U.S. President Donald Trump has canceled a planned trip to Poland to “ensure that all resources of the federal government are focused on the arriving storm … it’s something very important for me to be here,” he said Thursday.

The president owns several properties in Florida, including the Mar-a-Lago resort in Palm Beach and the Trump National Doral in Miami, which Trump has suggested as a possible venue for next year’s G-7 summit.

Residents along Florida’s Atlantic Coast have been told to stand by for possible evacuation. They are filling their gas tanks and stocking up on food, water, and emergency supplies.

Dorian largely spared Puerto Rico and the U.S. and British Virgin Islands, causing some floods and power outages but no major damage.