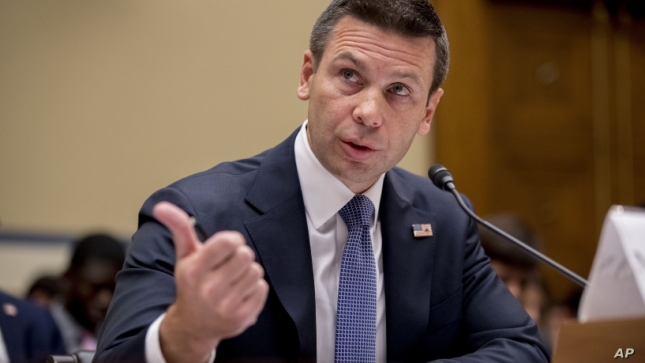 WASHINGTON -The acting U.S. Homeland Security chief on Sunday defended raids last week on food processing plants in Mississippi searching for hundreds of undocumented migrants, but acknowledged “the timing was unfortunate,” just days after a gunman targeted and killed 22 Hispanics in a mass shooting in El Paso, Texas.

Kevin McAleenan told NBC’s Meet the Press that of the 680 migrants detained in the raids on operations at five companies, 200 had criminal records and will be subject to deportation to their native countries.

Television footage showed children weeping when they realized parents had been detained in the raids and would not be picking them up as their school day ended last Wednesday. But McAleenan said the raids were “done with sensitivity” and child care issues taken into consideration.

He said 32 of the migrants arrested were released within an hour of their detention and 270 within a day, often times because of child care concerns.

A policy at the Immigration and Customs Enforcement agency, part of Homeland Security, calls for prosecution of companies that knowingly hire undocumented immigrants before arresting their migrant workers. But McAleenan deflected a question of why the workers, not the companies, were charged.

He said that “of course” the companies had committed a crime in hiring the workers.

“This case will be pursued,” he said.

Democratic presidential contender Kamala Harris told NBC, “I don’t know why they did what they did. Employers have to be responsible.” She accused the administration of President Donald Trump of a “campaign of terror” against immigrants, “making people afraid to go to work, to go to school.”

Koch Foods, which operates one of the plants where the raids took place, said in a statement that an employer “can dutifully and vigilantly comply with the immigration laws and still not know if some of its workers are unauthorized.”  It further said companies are dealing with competing pressures between laws requiring employment eligibility verification and those preventing discrimination.

Koch is hosting a job fair Monday near its Morton, Mississippi, plant.  Ads for the fair went up the day after the raids.

McAleenan said the raids had been planned for a year and complement stricter immigration enforcement at the southern U.S. border with Mexico to thwart migrants, mostly Central Americans, from entering the U.S. to seek asylum.

“We have to have internal enforcement” against undocumented migrants who are working in the U.S. without official authorization, he said. But the raids, he said, could have been postponed after the massacre at a Walmart store in the U.S.-Mexican border city of El Paso, allegedly carried out by a white nationalist who police said targeted “Mexicans.”

Trump has made tough immigration enforcement a hallmark of his White House tenure as he heads to his 2020 re-election campaign. He has called the surge of migrants reaching the border “an invasion.”

On Friday, he said, “If people come into our country illegally, they’re going out.”