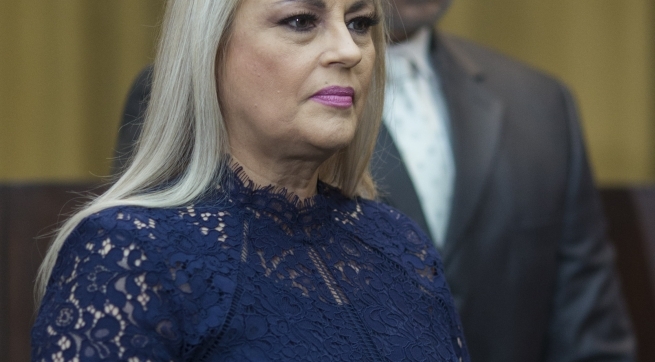 SAN JUAN, PUERTO RICO – In one of her first moves as Puerto Rico’s new governor, Wanda Vazquez announced late Sunday that she is suspending a pending $450,000 contract that is part of the program to rebuild and strengthen the island’s power grid, which was destroyed by Hurricane Maria.

Puerto Rico’s Electric Power Authority, which is more than $9 billion in debt, had been expected to sign the contract with Stantec, a consulting firm based in Canada. Vazquez did not explain why she was suspending the deal, saying only that transparency is a priority for her administration.

“We are evaluating all government contracts, no exceptions,” said Vazquez, who on Wednesday became Puerto Rico’s third governor in a week following popular protests over government corruption and mismanagement. “There is no room in this administration for unreasonable expenses.”

A Stantec official based in Puerto Rico did not respond to a request for comment.

However, a power company spokesman emailed a statement to The Associated Press saying that PREPA executive director Jose Ortiz planned to meet with Vazquez on Monday to explain why it was important to sign the contract. Ortiz said the contract has to be submitted before Oct. 6 so the U.S. territory can obtain federal hurricane recovery funds.

It is unclear whether Vazquez’s move will delay efforts to rebuild and bolster the power grid, which remains fragile and is prone to outages that have exasperated many of the island’s 3.2 million people. Power company spokesman Jorge Burgos said that he had no further details and that more information would be released after Monday’s meeting.

Puerto Rico’s power company has awarded several multimillion-dollar contracts since the Category 4 storm hit on Sept. 20, 2017, and many of those deals have come under intense scrutiny, with some being cancelled. Currently, Mammoth Energy Services’ subsidiary Cobra Acquisitions, which has some $1.8 billion in contracts with the power company, is facing a federal investigation.

Economist Jose Caraballo said he hopes Vazquez’s announcement is the first of more changes to come.

“I hope this isn’t a smoke screen and that there’s a real audit,” he said in a phone interview. “That’s what all these people who have lost trust in the government expect.”

Puerto Rico has been mired in political turmoil, with then-Gov. Ricardo Rossello resigning Aug. 2 following large protests. The island’s Supreme Court then ruled that his replacement was illegally sworn in, which left Vazquez, the justice secretary, next in line to become governor. The U.S. territory also is struggling to emerge from a 13-year recession and trying to restructure some of its more than $70 billion public debt load.