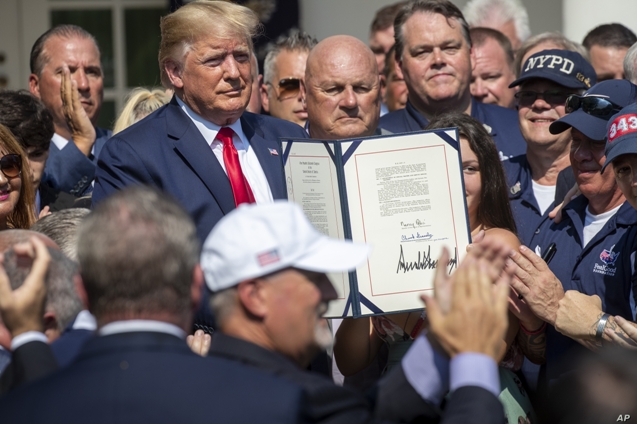 U.S. President Donald Trump Monday signed a bipartisan bill to ensure that a Victim Compensation Fund related to the terrorist attacks on September 11, 2001 never runs out of money.

“Our nation owes each of you a profound debt that no words or deeds will ever repay. But we can and we will keep our nation’s promise to you,” the president said in the White House Rose Garden, flanked by first responders.

The $7.4 billion fund had been running low, with benefits slashed severely.

The legislation signed Monday extends the fund through 2092, essentially providing for first responders for the rest of their lives.

Comedian and former host of The Daily Show, John Stewart, had lobbied Congress for the bill’s passage, publicly feuding with Senator Rand Paul in the process.

On Tuesday, the vote passed the Senate 97-2.  Paul and Senator Mike Lee from Utah voted against the bill.