Mueller: Investigation Did Not Exonerate Trump of Alleged Obstruction 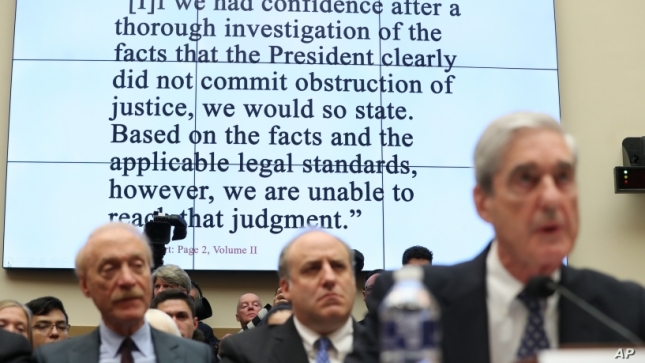 WASHINGTON – Former special counsel Robert Mueller told Congress Wednesday that his investigation of Russian meddling in the 2016 U.S. presidential election did not exonerate President Donald Trump of allegedly obstructing justice by trying to thwart the probe, even though the U.S. leader has frequently claimed it did.

As hours of testimony started, House Judiciary Committee chairman Jerrold Nadler asked the prosecutor, “Did you totally exonerate the president?”

“No,” Mueller responded, later adding, “The president was not exculpated for the acts he allegedly committed.”

Mueller explained, however, that Trump could not be criminally charged because of a long-standing Justice Department policy prohibiting the indictment of a sitting president and so his team did not “make that calculation” whether Trump should be charged.

Later in the hearing, Republican Congressman Ken Buck asked Mueller, “You believe that he committed – you could charge the president of the United States with obstruction of justice after he left office?

‘Not a witch hunt’

Trump has often attacked Mueller’s investigation, but Mueller, rebuffing one of the president’s frequent claims, said, “It is not a witch hunt.”

These two exchanges were among the few dramatic moments during five hours of testimony that had been highly anticipated. To a significant degree, Mueller made good on his vow to stick to the confines of his lengthy report on Russia’s bold interference in the election three years ago and Trump’s alleged effort to inhibit the special counsel’s probe. On the face of it, there appeared to be no explosive revelations about the Trump campaign’s interaction with the Russians or his conduct as president throughout Mueller’s high-profile investigation.

But whether the day-long hearings will have a lasting effect on Trump’s chances of winning a second term in 2020 and how Americans view him after hearing directly from Mueller is uncertain.

Mueller, 74, deflected dozens of questions about his 22-month probe and the 448-page report produced by his team of prosecutors. In years past, Mueller, as the long-time director of the Federal Bureau of Investigation, testified 88 times before congressional panels. His performance Wednesday, though, was halting at times, and he seemed unsure about many of the specifics of his own report.

He often asked for questions to be repeated — suggesting he had trouble hearing — and he declined to answer Republican lawmakers’ frequent queries about the origins of the Russia probe. He said questions about the start of the Russia investigation 10 months before he was named special counsel in May 2017 were “outside my purview” and currently the subject of a review by the Justice Department.

Mueller said his team unsuccessfully tried for a year to reach agreement with Trump to give live, face-to-face testimony, but the president only answered some questions in writing, and not about alleged obstruction.

He said the written responses were “not as useful as the interview would be,” but that prosecutors felt they were running out of time to subpoena Trump and then engage in a lengthy legal battle with the president’s lawyers over whether he would be compelled to testify in person.

Mueller, hewing closely to his report’s findings, acknowledged to Republican Congressman Doug Collins that his investigators concluded there was insufficient evidence to charge Trump or any of his 2016 campaign staff with conspiring with Russia to help Trump win a four-year term in the White House.

Another Republican, Congressman James Sensenbrenner, attacked Mueller for continuing his probe even knowing that Trump could not be charged with a crime, although Mueller said that was permissible under Justice Department guidelines.

“If you’re not going to indict the president, then you’re just going to continue fishing, that’s my opinion,” Sensenbrenner said.

As the House Judiciary Committee hearing ended after 3-1/2 hours, White House spokeswoman Stephanie Grisham said, “The last three hours have been an epic embarrassment for the Democrats. Expect more of the same in the second half.”

Lawmakers on the House Intelligence Committee, who conducted the afternoon session, asked Mueller about his findings on how Russia interfered in the election to help Trump defeat Democrat Hillary Clinton, his 2016 opponent. Democrats and Republicans alike had trouble getting Mueller to say anything of substance beyond confirming what was already in his report.

Mueller answered many questions from Judiciary Committee lawmakers with cryptic yes or no responses, saying he stood by the conclusions contained in his lengthy report. At one point, he said, “I again go back to the text of the report,” declining to further analyze his findings.

He declined to discuss why some people linked to the Russian probe were charged with criminal offenses and others were not. Nor would he venture into discussing any differences he had with Attorney General William Barr over Barr’s highly positive characterization of the report before it was released to the public.

And he wouldn’t be drawn into a discussion of his report as it might relate to impeachment of the president.

But Mueller occasionally disparaged Trump’s conduct during the 2016 campaign, including when at political rallies he talked about WikiLeaks’ disclosure of Democratic officials’ emails stolen by Russian operatives that were damaging to Clinton.

Democratic Congressman Mike Quigley read several Trump quotes about the emails, including, “This WikiLeaks is like a treasure trove” and “Boy, I love reading those WikiLeaks.”

Asked what he thought of then candidate Trump’s remarks, Mueller said, “Problematic is an understatement in terms of what it displays…”

Republicans insisted Mueller’s report had cleared the president and that the investigation was based on questionable intelligence before Mueller became the special counsel. The Republicans cited a report paid for by Democrats containing largely unsubstantiated and salacious claims by former British intelligence officer Christopher Steele about Trump’s time in Moscow before he entered politics.

Nadler and the other Democrats took pains to praise Mueller, a decorated Vietnam war veteran and his service as the FBI chief, and to highlight the most damning evidence against the president cited in the report.

Trump said this week he had no intention of watching the five-hour nationally televised Mueller hearing, or maybe only snippets of it. He has insisted the hearings are a colossal waste of time and that he has been exonerated of allegations that he either colluded with the Russians or interfered with Mueller’s investigation.

But shortly after Mueller acknowledged during his testimony that his investigation had not been impeded by the White House, Trump quickly said on Twitter, “In other words, there was NO OBSTRUCTION.”

Later in the day he told reporters that the Democrats “are devastated” following the hearing. “Their party lost so big today,” he said.

Of Mueller’s testimony, he said “In all fairness to Robert Mueller he had nothing to work with.  Obviously, he did very poorly today.”

Millions of Americans tuned in for what proved to be a riveting day of contentious questioning before the House Judiciary and Intelligence Committees.

The hearings were equally critical in importance for the 235 opposition Democrats in the House of Representatives, more than a third of whom have called for Trump’s impeachment or the start of an impeachment inquiry. These critics allege that the president committed “high crimes and misdemeanors” – the standard for impeachment — by trying to halt Mueller’s 22-month probe.

They focused much of their questioning on at least five instances Mueller cited in his lengthy report in which Trump allegedly sought to sidetrack the probe — obstruction allegations that could lead more Democrats to call for the president’s impeachment.

The Justice Department on Monday sent Mueller a letter emphasizing that he “must remain within the boundaries” of the public version of his report and could not “discuss the conduct of uncharged third parties.”

Even with vocal Democratic opposition to Trump, there appears to be no chance the Republican-controlled Senate would vote to convict Trump and remove him from office even if the House were to impeach him. National polls show Americans are opposed to impeaching Trump, either because they do not believe the allegations against him are serious enough to force his removal or prefer to cast an up-or-down vote on his presidency in the November 2020 election.

Meanwhile, Republican supporters of Trump were equally determined to demonstrate that the Mueller testimony is old news after release of his report two months ago. They contend that the probe should never have been started, that it was based on false assumptions and biased by zealous investigators who supported Clinton.

Trump has often claimed that Mueller’s investigative team was composed of “angry Democrats” out to get him and cites the fact that an FBI agent and a lawyer on Mueller’s team who were involved in a romantic relationship often traded anti-Trump text messages. The two said their personal statements did not influence their professional conduct.

The lawyer had previously left the Mueller team. Mueller told the lawmakers that when he learned two years ago of agent Peter Strozk’s anti-Trump texts he “acted swiftly” to have him reassigned within the Justice Department.