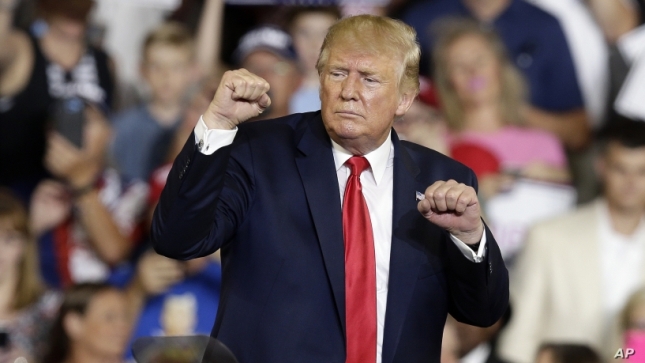 WHITE HOUSE — U.S. Congresswoman Ilhan Omar posted a tweet late Wednesday featuring a picture of herself in the U.S. House of Representatives chamber along with a message for President Donald Trump and his supporters, who have in recent days repeatedly suggested the U.S. citizen “go back” to her native Somalia.

Her response came after Trump, for the fourth consecutive day, attacked Omar and three other women of color in Congress, continuing to question their loyalty to the country and suggesting they should leave.

“I think in some cases they hate America,” Trump said of Congresswomen Omar, Alexandria Ocasio-Cortez, Ayana Pressley and Rashida Tlaib.

When Trump accused Omar, a war refugee from Somalia, of “anti-Semitic screeds,” the crowd in Greenville, North Carolina, responded with chants of “send her back.”

“These congresswomen, their comments are helping to fuel the rise of a militant hard left,” declared Trump at the political rally. “But that’s OK because we’re going to win this election like nobody’s ever seen.”

Several national polls show Trump trailing in a hypothetical matchup against several leading Democratic Party contenders vying for their party’s nomination to face the president in next year’s election.

Giving an early preview of how he will attack his opponent in 2020, Trump declared that those who support Democrats next year would be voting “for the rise of radical socialism and the destruction of the American dream, frankly, the destruction of our country.”

During his 90-minute rally Wednesday, Trump several times thanked other Democrats in the House for voting down, hours earlier, an attempt to push articles of impeachment against him.

The 332-95 vote to kill the measure was the first action by the chamber since the Democrats took control of it in January to consider impeachment.

Green defied party leadership, who contend formally raising the impeachment issue is premature as House committees, led by the Democrats who control the chamber, continue to investigate Trump and members of his Cabinet.

“We’re not having him set our agenda; we’re setting our own agenda,” House Speaker Nancy Pelosi on Wednesday said of Trump.

On Tuesday night, four Republicans joined every Democrat in the House to approve a resolution condemning Trump’s “racist” remarks. At the center of the dispute was Trump’s Sunday tweet telling the four congresswomen to “go back” to their countries to fix them before attacking the United States, even though all four are U.S. citizens and only Omar was not born in the country.

The House resolution, which was passed 240-187, “strongly condemns” Trump’s “racist comments that have legitimized and increased fear and hatred of new Americans and people of color.”

« Traffic Advisory Reminder: Lane Splits Coming on I-95 for Oxford Street Bridge Work in Providence
US Heat Wave Just Warming Up for Long and Scorching Weekend »