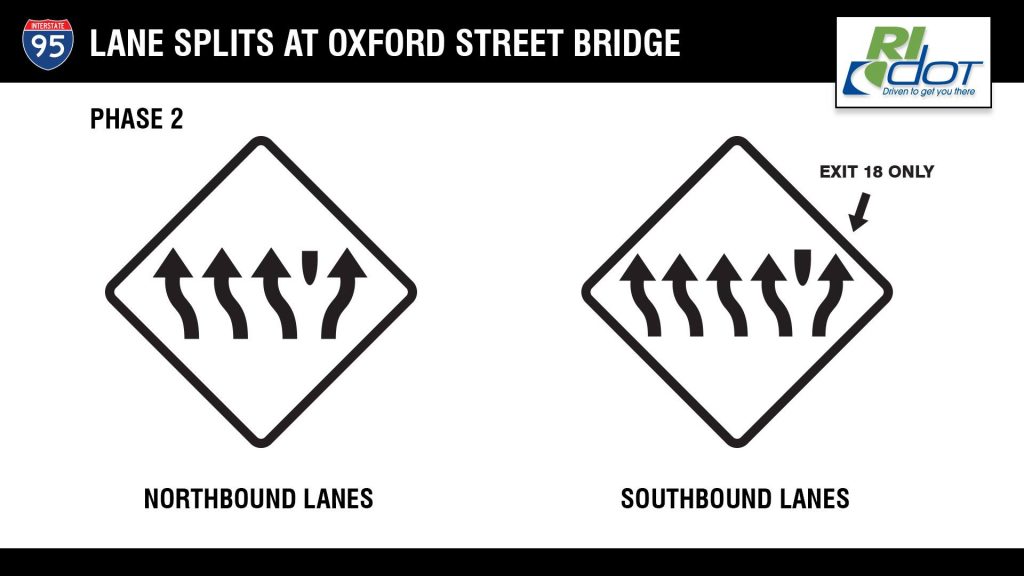 Changes to include different lane split configurations through the summer
The Rhode Island Department of Transportation (RIDOT) is reminding motorists about the upcoming temporary traffic pattern changes scheduled on I-95 in Providence as part of the $10.8 million Oxford Street Bridge rehabilitation project. The changes include lane splits this summer for both northbound and southbound traffic between Exit 18 (Thurbers Avenue) and the I-195 interchange.

The traffic patterns will provide a safe work zone so RIDOT can rapidly replace the bridge deck. The Department chose the summertime for this work because traffic volumes are lower as compared to other times of the year. All lanes in both directions are currently shifted to the left for Stage 1 of bridge work.

Starting on Friday, July 19, RIDOT will introduce a split-lane traffic configuration for both directions of I-95. The pattern will change every one to two weeks as RIDOT installs new deck sections one lane at time. All split-lane configurations are scheduled to be complete by the end of August, and traffic lane shifts are scheduled to be removed by the end of September.
During all phases, motorists on I-95 South will have to use the far-right lane to take Exit 18. During the split starting on July 26, motorists on I-95 South will not be able to access Exit 18, and should use Exit 19 (Eddy Street) for the R.I. Hospitals campus or Exit 17 (Elmwood Avenue) for destinations in South Providence. During this phase, motorists on I-195 West to I-95 South will be able to take Exit 18.

The introduction of the lane splits, coupled with an existing short merge for on-ramp traffic from Thurbers Avenue and Allens Avenue to I-95 North, may cause additional delays during rush hour periods. Motorists using the Thurbers Avenue/Allens Avenue on-ramp, particularly commercial truck traffic in and around the Port of Providence area, may wish to use alternate routes or avoid travel during the busiest times, which are typically 7 a.m. to 9 a.m. on weekdays. RIDOT will keep this on-ramp open, but will carefully monitor traffic and make changes as necessary.

This section of I-95 already is subject to daily congestion and travel delays. Motorists should plan extra time for their trip, especially during peak morning and afternoon rush hours. The use of alternate routes is recommended during those times. To avoid traffic congestion, RIDOT recommends that motorists ride the commuter rail to Providence or Boston during this work. There are 20 stops on weekdays at both Wickford Junction and T.F. Green Stations.

As was the case with lane splits RIDOT used last summer for highway work, all travel lanes will continue through the work zone. Motorists should not stop or switch lanes. Such behavior can lead to crashes or create unnecessary congestion.

Graphics depicting each stage of the lane splits

Week starting August 16 (Stage 5)
Northbound: Splits removed; All lanes shift right
Southbound: 1 to the left, 4 to the right – Use far-right lane for Exit 18

RIDOT is using accelerated bridge construction methods to rebuild this bridge and reduce the impact of construction on motorists. The Department will deploy pre-manufactured Northeast Extreme Tee (NEXT) beam components – a concrete deck/beam combination that is installed side-by-side to rapidly create a new bridge deck. This new technology will allow RIDOT to complete all phases involving traffic pattern changes this summer, shaving several months off the construction schedule.
All construction projects are subject to changes in schedule and scope depending on needs, circumstances, findings, and weather.