Russia, China on the Prowl; How US Navy is Responding 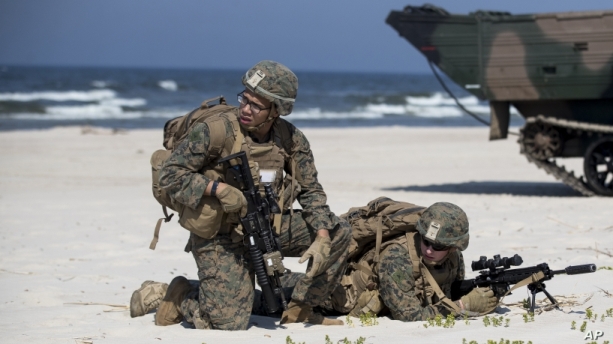 NORFOLK NAVAL STATION, VIRGINIA – A major military exercise involving maritime forces from 18 countries is underway in the Baltic Sea, but at its helm is not a fleet permanently based in Europe, but one based half a world away in the U.S. state of Virginia.

Baltic Operations, known as BALTOPS, is one of the largest exercises in northern Europe: 50 ships, two submarines, 36 aircraft, and more than 8,000 troops.

The exercise, which started Sunday and runs through June 21, is steeped in nearly five decades of tradition. And the U.S. Navy’s 2nd Fleet has traveled from the U.S. East Coast to the region to lead the exercises. The fleet was made operational just last month, as increased activity by Russian and Chinese navies worried Washington.

“I can be with a small part of my staff on board this ship, or on board an aircraft carrier, or an austere location somewhere else,” U.S. Vice Admiral Andrew “Woody” Lewis, the commander of 2nd Fleet, told VOA in Norfolk, Virginia, before heading to the exercises.

Lewis said the “whole intent” of re-establishing the 2nd Fleet is to veer away from the “set lines” that break apart the geography between U.S. fleet operations.

“An artificial seam creates vulnerabilities, so you know, re-establishing the 2nd Fleet and focusing on that seam, it presents an opportunity. And that’s what we want to do, turn vulnerabilities into opportunities,” Lewis said.

The 2nd Fleet guards the North Atlantic and the Arctic. It was shut down in 2011 to save money.

Back then U.S officials had fewer worries about those areas, but times have changed. Top U.S. military leaders say Russia is on the prowl at levels not seen since the end of the Cold War, and China is also operating in the region.

“So when we are planning these exercises, and we go out and we operate with our ships, in our aircraft, we are thinking about China and Russia and how we are going to win this high-end fight,” said Navy Cmdr. Tara Golden, who heads U.S. Second Fleet training and development.

Until now, the NATO presence in Norfolk focused on developing future NATO military strategy and concepts, not day-to-day operations.

“It is a concrete way that proves that the alliance is adapting today,” he said, “because we need to be fed by the lessons coming from the field in order to adapt our own capabilities.”