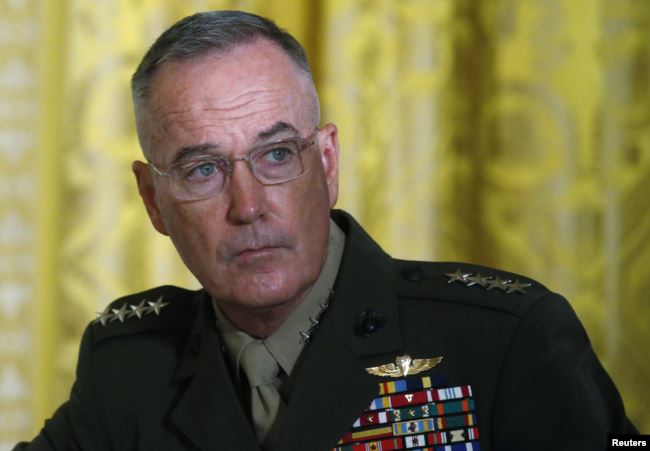 Michael Bowman on Capitol Hill contributed to this report.

PENTAGON — Acting Secretary of Defense Pat Shanahan said the steps taken to bolster the U.S. military presence in the Middle East have deterred Iran and “put on hold the potential for attacks on Americans,” even as Iran carried out other attacks.

“It doesn’t mean that the threats that we previously identified have gone away. Our prudent response, I think, has given Iranians time to recalculate,” Shanahan told reporters at the Pentagon Tuesday.

“We talked about those threats, and there were attacks,” Shanahan said.

Asked to clarify what attacks he was referring to, Pentagon spokesman Lt. Col. Joe Buccino told VOA that U.S. intelligence points to Iran as “highly likely responsible” for the attack on four oil tankers in the Persian Gulf.

The secretary and other officials are scheduled to brief members of Congress in a closed-door session later Tuesday about the military threat the White House says Iran poses in the Middle East.

Among those going to Capitol Hill are Secretary of State Mike Pompeo, Shanahan and Joint Chiefs of Staff Chairman Gen. Joseph Dunford.

U.S. lawmakers have demanded information about the Iranian threat for days.

President Donald Trump said Monday that Iran has been “very hostile,” and that the United States will have no choice but to respond to Iranian aggression “with great force.”

The U.S. Navy’s 5th Fleet said it has increased maritime patrols and exercises in the Arabian Sea that highlight the “lethality and agility to respond to threat.” The Pentagon has deployed the USS Abraham Lincoln aircraft carrier strike group, the USS Arlington landing platform dock ship, a Patriot missile battery and B-52 bombers to the region.

Amid rising tensions in the Middle East, Dunford canceled a trip to Brussels, where he was to have met NATO members Wednesday. Dunford’s spokesman, Air Force Col. Patrick Ryder, said the cancelation was because of “unforeseen commitments” that require him to remain in Washington this week.

Iranian Foreign Minister Mohammad Javad Zarif has responded to what he called “genocidal taunts” by saying that “Iranians have stood tall for a millennia while aggressors all gone,” including Genghis Kahn and Alexander the Great. “Try respect. It works,” Zarif tweeted.

Secretary of State Mike Pompeo said Monday the U.S.’ “core challenge” in the Middle East is “diminishing (Iran’s) capacity to support” proxy forces such as the Houthi rebels in Yemen.

“We will not allow Iran to hide behind its proxy forces, but that if American interests are attacked, whether by Iran directly or through its proxy forces, we will respond in an appropriate way against Iran,” he said in an interview on Salem Radio Network’s “The Hugh Hewitt Show.”

Republican Sen. Lindsey Graham said Monday that after a briefing from National Security Adviser John Bolton, “It is clear that over the last several weeks, Iran has attacked pipelines and ships of other nations and created threat streams against American interests in Iraq.”

As the war of words between the two countries showed little sign of cooling off, Iran said Monday it has quadrupled its uranium enrichment capacity.

Iranian officials say the uranium will be enriched for civilian energy uses, far below weapons grade as spelled out in the 2015 nuclear agreement. Enriching uranium means concentrating the element’s radioactive component.

Natural uranium has less than 1% U-235, while uranium for electric power production is around 4% pure, and weapons-grade material is refined to contain about 90% of this active ingredient.

Iran could soon exceed the amount of material it is allowed to stockpile under the deal.

​Iranian President Hassan Rouhani announced two weeks ago he is pulling out of some parts of the six-nation nuclear deal, including the condition that Iran sell excess amounts of uranium to other nations.

Rouhani has threatened to move Iran closer to weapons-grade enrichment unless it sees promised economic relief from the deal by early July.

Trump pulled out of the nuclear agreement deal one year ago. He re-imposed sanctions on Tehran and has threatened other penalties on countries that still do business with Iran. Trump’s decision has made the Iranian economy, already in tatters, even weaker.