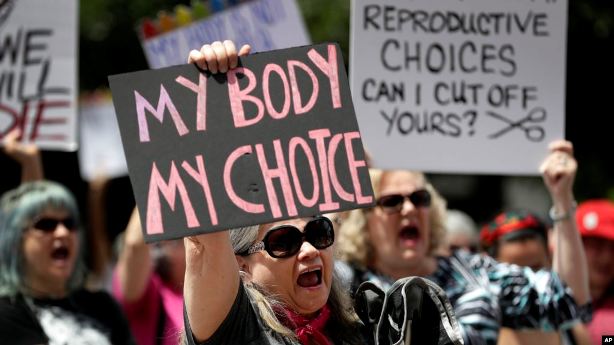 Dozens of protests supporting abortion rights unfolded across the United States on Tuesday, including one held outside the Supreme Court in Washington.

The demonstrations targeted a recent array of anti-abortion laws being adopted by conservative state legislatures that have voiced the hope that the ensuing legal battles over the strict abortion curbs will eventually push the court to overturn its landmark 1973 decision that legalized abortion in the country.

The laws have imposed various restrictions, often limiting abortions to the first few weeks of a woman’s pregnancy and sometimes before a woman would know she was pregnant.

“Across the country,” the groups said, “we are seeing a new wave of extreme bans on abortion, stripping away reproductive freedom and representing an all-out assault on abortion access.”

They described the new laws adopted or headed toward enactment in Mississippi, Alabama, Georgia, Ohio, Missouri and elsewhere as President Donald Trump’s “anti-choice movement … and it’s terrifying, particularly for women of color and low-income women who are most affected by these bans.”

In the southern state of Alabama, virtually all abortions were banned, an action that Trump, and some other Republicans who otherwise support most abortion restrictions, have said went too far. Trump two decades ago described himself as “very pro-choice” in support of abortion rights, but last weekend said he approves ending pregnancies only if they occurred because of rape or incest or if the life of the mother is endangered.

At the Supreme Court, several hundred abortion-rights supporters staged a protest against the new laws, most of which have yet to take affect and are being challenged in court suits as not complying with the high court’s 1973 decision.

Several Democratic presidential contenders looking to be the party’s nominee against Trump in the November 2020 election joined the protesters.

“We are not going to allow them to move our country backward,” Minnesota Sen. Amy Klobuchar told the crowd through a megaphone.

Conservatives pushing for the abortion restrictions have been emboldened by Trump’s appointment of two conservative justices to the Supreme Court, Neil Gorsuch and Brett Kavanaugh, who they believe will join three other conservatives on the court to make a 5-4 majority to overturn the Roe vs. Wade decision. The 1973 Roe decision upheld the right to an abortion.

It could be months before a new abortion rights case reaches the Supreme Court, but it is possible a new ruling could land in the midst of next year’s presidential election campaign.