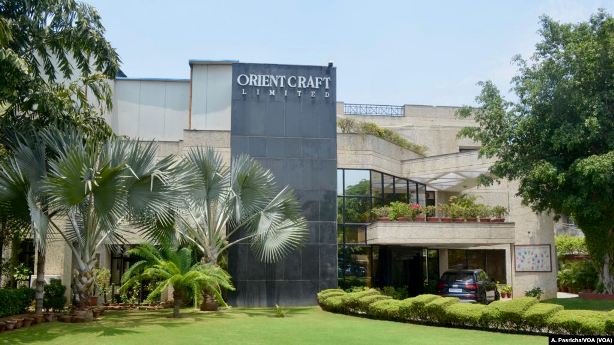 Orient Craft, one of India’s largest apparel exporters, says it could benefit from increased business as the US-China trade war intensifies. This building in Gurgaon on the outskirts of Delhi houses its office and one of its garment units.

NEW DELHI — As work on establishing a massive garment-manufacturing unit by one of India’s leading apparel exporters enters the final stages, the company is optimistic about keeping the machines humming. Slated to begin production in August, Orient Craft’s new unit in Jharkhand, one of India’s least developed states, will employ about eight thousand workers.

Inquiries from buyers in the United States, its biggest market, have increased in recent months as a trade dispute with China intensifies, according to A.K. Jain, who heads the Commercial department at Orient Craft. That is why he is upbeat about generating new business. “This is an unbelievable blessing in disguise,” he says. “It will give us an edge.”

Exporters in India are reaping the benefits of the trade war between the world’s two biggest economies as business with both countries jumps, according to Ajai Sahai, who heads the Federation of Indian Export Organizations.

“While overall exports have gone up by nine percent, exports to the U.S. have gone up by 13 percent and to China by 32 percent,” he says. And as the confrontation escalated last week after the two countries failed to reach a deal, his optimism increased. “Since the tariff hike is now substantial from 10 to 25 percent we feel we will have more advantage in market access.”

India is among a handful of countries set to benefit from the U.S.-China trade dispute, a report by the United Nations Conference on Trade and Development stated in February. “The saying ‘it’s good to fish in troubled waters’ could apply to some bystander nations,” the report said, pointing out that most of the Chinese exports subject to U.S. tariffs will be captured by firms in third countries.

While China has opened its doors wider to a range of agricultural products from India such as rice and sugar, exports to the United States have increased in areas such as chemicals, pharmaceuticals, jewelry, auto components and apparel.

“In various products we were losing out to China with a very narrow margin. With the hike, we are able to offset that,” says Sahai. “That is why the tariff war has presented us an opportunity to enter markets in the U.S. in some areas we were hardly penetrating.”

But even as Indian exports benefit, trade experts warn that clouds are also gathering over New Delhi’s trade relationship with Washington. In recent months, U.S. President Donald Trump has slammed Indian duties on some U.S. goods, saying that India is not providing “equitable and reasonable access” to its markets.

Economists also warn that an eventual slowdown in global trade due to the U.S.-China trade spat will hit all countries including India, which is already staring at an economic slowdown

Growth in the world’s fastest growing major economy flagged to 6.6 percent in the last quarter of 2018 – it’s lowest in more than a year. It is not expected to fare much better this year.

The slump is blamed on slackening domestic consumption, which powers the Indian economy. Unlike East Asian countries, which have raced ahead on the back of exports, growth momentum in India is largely based on an affluent middle class snapping up goods such as cars, refrigerators, air conditioners and other consumer goods.

But there are concerns as automobile sales, the barometer of consumption, plunged to the lowest in nearly eight years in recent months.

At the Hyundai car showroom in the upscale business hub of Gurgaon, near Delhi, a range of swanky models beckon customers, but there are few to be seen. This is in marked contrast to the last three years when buoyant automobile sales helped India overtake Germany to become the world’s fourth largest automobile market. That prompted car makers such as Hyundai, Honda and Toyota to expand their presence in the country.

“In recent years, March and April used to be good months. But now 20 to 30 percent drop is there in these months also,” says Gagan Arora, business head at the Hyundai showroom. “There is a slowdown in the whole industry. New buyers are not being added so frequently.”

Economists say while rising exports to the United States and China present a silver lining, the first challenge facing India’s new government due to take office after vote counting in elections is completed this week, will be how to restore overall momentum to the economy and see why consumers are not so willing to open their wallets.