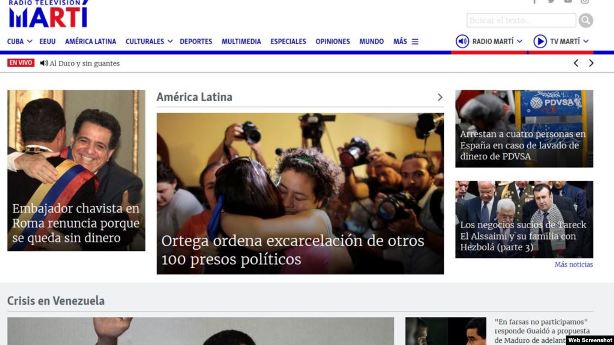 The online Radio TV Marti website, programmed by the Office of Cuba Broadcasting.

The U.S. government service charged with delivering objective news into Cuba produces both “bad journalism” and “ineffective propaganda,” according to an independent audit released Tuesday.

The U.S. Agency for Global Media (USAGM), which oversees taxpayer-funded international broadcasting, ordered the audit of the Office of Cuban Broadcasting (OCB) in February in response to broadcasts last year that contained anti-Semitic remarks about billionaire philanthropist George Soros.

John Lansing, the CEO of USAGM, later apologized to Soros and launched the audit to find “any patterns of unethical, unprofessional, biased or substandard journalism” at OCB.

The results amount to a harsh indictment of practices at OCB, which as part of USAGM is required by law to provide objective, balanced programming that reflects a variety of viewpoints.

Instead, the five experts on the audit panel said the journalism at OCB – radio, TV and online – is one-sided, fails to provide context and crosses into strident advocacy for hard-line Cuban dissident causes.

“It’s not just advocacy; it’s really like an old-style kind of propaganda, of constant hammering,” said the panel’s chairman, Edward Schumacher-Matos, a professor at the Fletcher School of Law and Diplomacy at Tufts University.

The audit says that “almost any criticism” of the Cuban government is allowed on Radio and TV Marti programs, while there is “little or no attempt to obtain a response or provide balancing information.”

“Well-established norms of objectivity are routinely disregarded in favor of propagandistic communications tactics,” the panel said. The agency’s programs are “unlikely to succeed in promoting freedom of democracy given the demography, culture and circumstances of Cuba today.”

The relentless anti-Cuba advocacy “crowds out other kinds of news coverage and even advocacy journalism that might be more effective, for example telling positive stories about you or about the United States,” said audit panelist Roberto Suro with the Pew Hispanic Center.

In an introduction to the report, Lansing said a working group to update journalistic standards has been appointed and a new best practices editor will be brought in. “Additional training covering fairness, objectivity, balance and bias in coverage will be required for all OCB employees,” he wrote.

Based in Miami, OCB oversees Radio Martí, which began in 1985; TV Martí, which started five years later; and an online news site. The agency’s budget was $29 million in 2018, and its broadcasts – often jammed by the Cuban government – reach an estimated 11 percent of the island’s population.

Radio and TV Martí have long been faulted for bad journalism and propaganda. In 1999, the State Department’s inspector general said the stations had “problems with balance, fairness, objectivity.” A U.S. Senate investigation in 2010 said Martí had “negligible support from among the Cuban people.”

Despite the criticism, Radio and TV Martí have had continued support from the U.S. Congress. But that won’t be the case if they don’t improve, said Tomás Regalado, the former Miami mayor who leads OCB.

Regalado was appointed by the Trump administration and took over in June 2018, the month after the segments disparaging Soros were broadcast. “One member of Congress told me, ‘Well, if Radio and TV Martí doesn’t reinvent itself, it cannot be defended,’ ” Regalado said.

In addition to the OCB, USAGM oversees four other networks: the Voice of America, a federal organization; and three nonprofit organizations, Radio Free Europe/Radio Liberty, Radio Free Asia and the Middle East Broadcasting Networks, which receive grants from USAGM.

Authors of the audit acknowledged an “inherent tension” in all USAGM news organizations as part of the government. But they said “nowhere is that tension more acute” than in TV and Radio Martí.

“Martí openly engages in both propaganda and the promotion of a current administration’s foreign policy,” the report says, “in this case towards Cuba (as well as Venezuela and Nicaragua).”

The audit cites multiple examples of Martí failing to meet journalistic standards, among them:

Radio and TV Marti’s “one-sided talk shows and combative hosts” that dwell on Cold War-era grievances, the authors found, are “fundamentally ill-suited” in today’s Cuba, where 40% of the population was born after the fall of the Soviet Union.

“I’m not disputing the existence of those misdeeds,” Suro said, “but a lot of this happened before most of the people in Cuba were born.”

Regalado said OCB’s biases were not the result of direct political interference or meddling by government officials as much as an institutional culture.

“These are very well-meaning people who want the best for Cuba, but who also are filled with lots of old resentments and anger that are totally understandable,” Schumacher-Matos said.

In recent years, the report says, there has been some easing of government controls, with more Cubans gaining internet access, increased influence for the Catholic Church and even growth in private markets.

To reach this less-political audience in Cuba today, the report recommends more balanced journalism as well as neutral coverage of noncontroversial events in Cuba, such as hurricane evacuation.

The controversy over the Soros segment, originally broadcast in May 2018, became public months later after a blogger exposed it and U.S. mainstream media followed up. Among other things, Soros, a frequent target of conspiracy theorists, was described as “a nonbelieving Jew of flexible morals.”

Regalado said nine Marti staffers were terminated, have resigned or been placed on probation, pending investigation.

When launching the audit in February, Lansing denounced the Soros segment as “deeply offensive and wholly inconsistent with our professional standards and ethics. OCB should not have aired it.”

Besides Schumacher-Matos and Suro, the other OCB audit panelists were Laura Castañeda with the Annenberg School for Communication and Journalism at the University of Southern California; former Telemundo journalist Andrea Sarralde; and Maria Fernanda Sandoval, a Latin American specialist.

Matt Walsh, the USAGM deputy director for operations, said in an interview that changing the culture at OCB will be a challenge.

“(Lansing) really wants us to focus on how we can rebuild OCB from the ground up,” Walsh said of his boss, “which certainly is something that’s not going to happen overnight.”

In the last year, USAGM also dealt with other serious journalist ethical violations.

In October, 15 journalists from the VOA Hausa language service were fired or disciplined for accepting bribes from a Nigerian official. And the chief of the VOA Mandarin language service was discharged for allowing a billionaire Chinese exile to make unsubstantiated charges against officials in Beijing during an extended live broadcast.