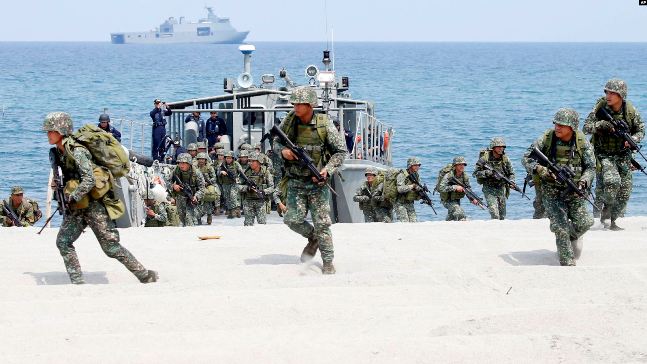 FILE – In this May 9, 2018 photo, Philippine and U.S. Marines storm a beach as part of an amphibious landing exercise during a two-week joint U.S.-Philippines exercise facing the South China Sea in the Philippines.

TAIPEI — A rare U.S. Coast Guard exercise in the South China Sea this month shows that the United States is broadening its reach in a disputed waterway, a new pressure point between Washington and the sea’s chief claimant Beijing.

On May 14 the U.S. Coast Guard cutter Bertholf joined two Philippine coast guard vessels for training in “maritime security” and “law enforcement capabilities” in the sea, the U.S. Indo Pacific Command said in a statement. They spotted two Chinese vessels in a disputed area of the South China Sea that day near Scarborough Shoal west of the Philippine island of Luzon, Philippine media reported.

China and the Philippines dispute sovereignty of the shoal, which Chinese vessels took in 2012. China claims about 90 percent of the whole surrounding sea, including tracts that five other governments including the Philippines call their own.

While U.S.-Philippine joint exercises are routine, the Coast Guard seldom gets involved, maritime experts say. The last U.S. Coast Guard vessel in the Philippines, a treaty ally since 1951, visited more than seven years ago.

The U.S. sent its cutter last week to diversify resistance against Chinese expansion in a sea where Washington has multiple allies and China is becoming more sophisticated toward defense, scholars believe.

“That’s about interoperability, that’s about increasing their capabilities,” said Stephen Nagy, senior associate politics and international studies professor at International Christian University in Tokyo. “That’s a message to Beijing that the United States is engaging in the region at four or five different levels, not just a military level.”

More than the navy

The United States makes no claim to the 3.5 million-square-kilometer South China Sea, but it wants to keep the waterway open internationally. The U.S. Navy routinely has sent vessels into the sea 11 times since President Donald Trump took office in 2017. The most recent sailing came Sunday (May 20) when the USS Preble passed within 12 nautical miles (22.2 kilometers) of Scarborough Shoal.

A broader, Navy-plus strategy began showing in 2016 when the U.S. government lifted a ban on selling certain weapons to Vietnam. In March this year, two pairs of U.S. B-52 bombers flew over the disputed sea.

Brunei, China, Malaysia, the Philippines, Taiwan and Vietnam claim all or parts of the sea. They value mainly it for fisheries and undersea fossil fuel deposits. China has alarmed the other governments since 2010, when it began reclaiming land to expand tiny islets for military installations. China operates Asia’s strongest armed forces.

U.S. officials may have sent the coast guard vessel to stress “law enforcement” and head off any fears of naval conflict, said Jonathan Spangler, director of the South China Sea Think Tank in Taipei.

China and Taiwan send their own coast guard vessels for law enforcement, he added. Among the would-be crimes: drug traffic and illegal fishing.

U.S. officials in turn see Chinese forces as more than a navy, said Alexander Huang, strategic studies professor at Tamkang University in Taiwan. They follow its navy, coast guard and armed fishing boats that can be used for Chinese government-sponsored work, he said.

“I think the use of the United States Coast Guard is part of dealing with the low intensity, short of naval engagement, but involving the Chinese maritime militia or the Chinese fishing boats or weaponized fishing boats,” Huang said.

The Philippines, like other Southeast Asian claimants to the sea, lacks the military strength of China. But decades of bilateral agreements plus six years of joint naval exercises with the United States, a former Philippine colonizer, give Manila support.

A world arbitration court backed the Philippines in 2016 by rejecting the legal basis for China’s maritime claims. China, however, still keeps ships at Scarborough Shoal. Over the past half year, scores of Chinese fishing boats have passed near another disputed islet that the Philippines is building up.

The Philippine government is making a “coordinated effort” to balance foreign policy between the superpowers, said Herman Kraft, a political science professor at the University of the Philippines. Philippine defense officials are handling the U.S. side of that equation, including coast guard ties, he said.

“What’s actually interesting is the extent to which they’ve fundamentally allowed the Department of Defense to nurture the relationship with the U.S. military and auxiliary forces,” Kraft said.