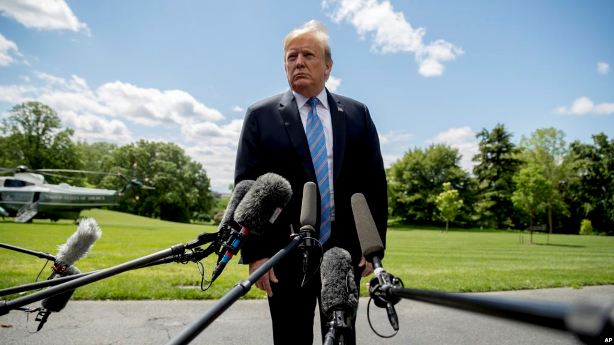 FILE – President Donald Trump listens to a question from a member of the media on the South Lawn of the White House in Washington, May 14, 2019.

Michael Bowman and Shahla Arasteh contributed to this report.

U.S. President Donald Trump says he “won’t be happy” if Iran takes military action amid rising tensions in the Middle East, his spokeswoman said Thursday, as an Iranian diplomat downplayed such prospects while reserving Iran’s right to defend itself.

White House press secretary Sarah Sanders reiterated to reporters early Thursday that Trump wants a “behavioral change” from Iran and would oppose any aggressive actions by the Islamic Republic.

Iran’s ambassador to the United Nations, Majid Takht-e-Ravanchi, downplayed that possibility, saying on National Public Radio’s “Morning Edition” Thursday his country is not interested in escalating regional tensions. “If something goes wrong, everyone loses,” he said. But Ravanchi added, “It is our right to be prepared” and “It is our right to defend ourselves.”

The diplomat accused the U.S. and regional countries of making “false allegations” about Iran.

Trump said Wednesday there is “no infighting whatsoever” about his Middle East policies and that he is “sure that Iran will want to talk soon.”

Those remarks came in response to Washington Post and New York Times reports about clashing opinions between those in his administration who see Iran preparing to attack U.S. forces, and other officials, including some from European allies, who argue Iran’s moves are defensive precautions in response to U.S. actions toward Iran.

Trump decided last year to withdraw from an international agreement limiting Iran’s nuclear program in exchange for sanctions relief, and applied fresh actions to cut off Iran’s oil and banking sectors in an attempt to alter the Iranian government’s behavior.

Iranian Foreign Minister Mohammad Javad Zarif said Thursday that “the escalation by the U.S. is unacceptable and uncomfortable,” and that despite the U.S. withdrawal from the nuclear deal, Iran is exercising “maximum restraint.”

The U.S. has ordered its non-emergency employees to leave the country’s embassy in the Iraqi capital, Baghdad, and its consulate in Irbil as the Trump administration warned of threats against American forces in the Middle East from Iran or Iranian-backed proxies.

“There are only two reasons for ordering their departure: We have credible intelligence that our people are at risk or in preparation for military action in Iran,” said the Senate Foreign Relations Committee’s top Democrat, Robert Menendez of New Jersey. “The Trump administration has not provided any information to this committee on the intelligence behind their decisions or what they plan to do in Iraq or Iran.”

Menendez demanded the officials bring panel members up to date on “any plans to go to war with Iran.”

Committee chairman, Idaho Republican James Risch, said he has been briefed on the unfolding situation in the Middle East and said a briefing of the full U.S. Senate was “in the works.”

The Pentagon has dispatched an aircraft carrier and nuclear-capable bomber planes to the region in the past few days, with a Patriot missile battery and a landing platform dock ship on the way. The Patriot system offers protection from aircraft and missiles, while the LPD carries Marines and the aircraft, hovercraft or boats needed to put them ashore to fight in distant places.

But a major U.S. ally in the region, the UAE, says it will show “restraint” in the face of Iranian aggression.

“We need to emphasize caution and good judgment,” UAE Foreign Affairs Minister Anwar Gargash said Wednesday. “It is easy to throw accusations, but it is a difficult situation. There are serious issues and among them is Iranian behavior.”

Meanwhile, a senior British officer in the U.S.-led military coalition fighting Islamic State in Syria said Tuesday he has not seen an increased threat to his troops by Iranian-backed forces in Iraq or Syria.

Major General Chris Ghika’s statement to reporters contradicts the Trump administration, which has asserted for more than a week that they have detected potential Iranian threats against U.S. forces in the Middle East.