Missouri is Latest US State to Approve Anti-Abortion Bill 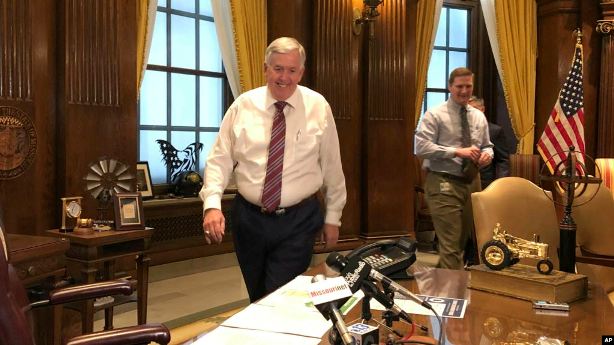 Missouri Gov. Mike Parson arrives for a news conference in his Capitol office in Jefferson City, Missouri, May 14, 2019. Parson voiced support for an abortion ban bill on Wednesday.

Missouri is the latest U.S. state to act in favor of a restrictive abortion ban bill, bolstering a national movement Republicans hope could lead to the revocation of the landmark 1973 decision that legalized abortion.

The Republican-led Senate in the midwestern U.S. state voted 24-10 early Thursday to ban abortions after eight weeks of pregnancy. The legislation includes exceptions for medical emergencies but not for pregnancies caused by incest or rape.

The state’s Republican-led House must approve the measure before it goes to Republican Governor Mike Parson for him to sign into law. Parson voiced support for the bill on Wednesday.

The Missouri senate’s passage of the bill came hours after Republican Alabama Governor Kay Ivey signed into law a near-total ban on abortion.

Lawmakers in the southeastern U.S. state had passed the legislation Tuesday, sparking a legal fight over a measure that becomes the nation’s most stringent abortion law.

The Planned Parenthood Federation of America vowed Wednesday to challenge the legislation in court. “We have no choice,” said president Leana Wen. “We are talking about the rights for generations to come.”

The Republican-dominated Senate voted 25-6 to make performing an abortion at any stage of pregnancy a felony punishable by up to 99 years or life in prison for the abortion provider, although women seeking or undergoing an abortion would not be punished. The only exception would be when the woman’s health is at serious risk.

Senators rejected an attempt to add an exception for rape and incest.

Supporters said the bill is designed to spark litigation that could lead to the U.S. Supreme Court overturning the landmark 1973 decision that legalized abortion.

Emboldened by the Supreme Court’s new conservative justices, Kentucky, Mississippi, Ohio and Georgia have approved bans on abortion once a fetal heartbeat is detected, which can occur in about the sixth week of pregnancy. And abortion opponents in several other states are seeking to challenge abortion access.

“This is a plan by the Republican Party, make no mistake, to overturn Roe v. Wade and turn back the clock on women’s reproductive civil and human rights,” U.S. Senator and Democratic presidential hopeful Kirsten Gillibrand said in an interview Wednesday on CNN.

“Roe v. Wade is settled law and should not be overturned,” Biden said. “The choice should remain between a woman and her doctor.”

A Pew Research Center poll conducted late last year found that 58% of those surveyed said abortion should be legal in almost all cases while 37% said it should be unlawful.