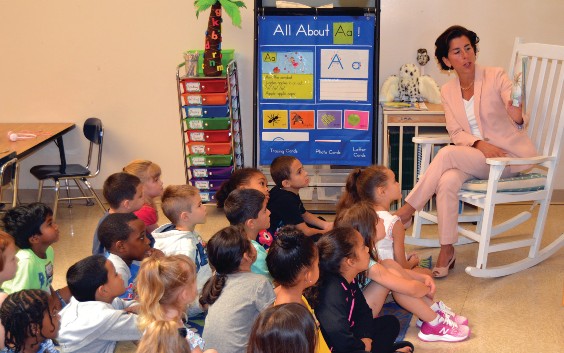 “Kids flourish because of access to quality pre-K,” Raimondo said. “If you don’t start early, these kids are behind by first, second grade.”

Governor Gina M. Raimondo, Department of Human Services Director Courtney E. Hawkins, and United Way CEO and President Cortney Nicolato will visit the Tri-County Action Agency’s pre-kindergarten classroom to plant lima beans with the students and read to them before briefly speaking about the importance of universal pre-kindergarten and high quality learning sites like Tri-County.

Governor Raimondo last month announced that Rhode Island has once again been recognized as a national leader in early childhood education as one of only three states to meet the quality standards of the National Institute for Early Education Research (NIEER). This recognition comes at the same time that the state looks to expand access to these high-quality programs through the Governor’s push for universal pre-K.

“Rhode Island is home to one of the best pre-K programs in the country, and it’s a testament to the incredible educators who support our youngest students day in and day out. I have seen firsthand the amazing work these educators and students are doing in classrooms across the state, and I believe that every child and every family deserves access to these meaningful early learning opportunities,” said Governor Gina M. Raimondo. “Rhode Island is already a leader in quality, and we are committed to maintaining those high standards while we push forward to become a leader in equity and access.”

In the 2018-2019 school year, Rhode Island served 1,080 children in the state-funded pre-K program, an increase of 72 children over the prior year. Since 2015, enrollment in the program has tripled.

Under the Governor’s proposed expansion, if approved by the General Assembly, another 540 seats would be added in the 2019-2020 school year. A second phase of expansion would take place over the following four years, increasing access to high quality, state-funded programs through a mixed delivery model for 7,000 4-year-olds by 2024.

“The research is clear that getting students into high-quality early learning programs can change the trajectory of their lives. Children who have access to quality pre-K are more likely to read fluently and joyfully by third grade, a key marker of future success. They’re also less likely to require special education services and more likely to graduate high school,” said Ken Wagner, former Commissioner of Elementary and Secondary Education. “These programs are a high-impact lever to improve student outcomes, and an investment today will pay dividends down the road.”

“We’ve already tripled the number of public Pre-K classes and expanded all-day kindergarten to every district in the state, giving thousands of our littlest learners the right start in life. It’s time to do more,” said DHS Director Courtney Hawkins. “High quality universal Pre-K is one of the best investments we can make, and it’s a long-term investment in the future of our state. Every child deserves a shot at a bright future and these opportunities shouldn’t be driven by luck or privilege.”

NIEER announced Rhode Island’s performance in the annual State of Preschool Yearbook, a national report on state-funded pre-kindergarten programs, with detailed information on enrollment, funding, teacher qualifications, and other policies related to quality. Rhode Island was one of only three states to meet all 10 quality standards benchmarks, which cover everything from curriculum supports and teacher experience to class sizes and ongoing professional learning.

The lottery for next year’s Rhode Island Pre-Kindergarten Program will open in early May, and families must submit their applications by July 1. Families can sign up for a waiting list, linked below, in order to be notified as soon as the application goes live. To be eligible for pre-K, children must be 4 years old by September 1, and they must be residents of one of the identified communities.

« The Red Cross is helping a family after a fire Sunday in Johnston
Trump: US ‘Can Make a Deal’ with China »