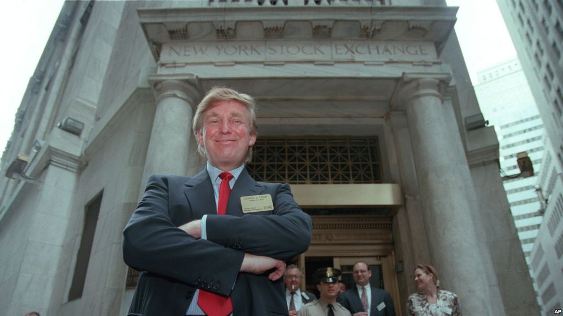 FILE – Developer Donald Trump poses for photos outside the New York Stock Exchange after the listing of his stock in New York, June 7, 1995.

Between 1985 and 1994, Donald Trump’s businesses lost more than $1 billion, allowing the future president to avoid paying federal taxes for eight of those 10 years, The New York Times reported Tuesday.

Trump portrays himself as a successful self-made entrepreneur and master dealmaker. However, he lost more money year after year than any other U.S. taxpayer, according to the Times, which did not use the actual returns but instead used information provided by someone who has access to the returns.

The bulk of Trump’s losses during that period came from his core businesses, including hotels, casinos and retail space inside apartment buildings.

They also include failed investments in an airline, a professional football team and unfinished plans for real estate developments.

According to the Times, Trump was able to maintain a life of luxury all those years because most of his money came from banks and bondholders who invested in the Trump empire. Trump also relied on his father’s wealth, according to the report.

But it appears Trump did not break any federal laws because the U.S. tax code allows people to deduct substantial business losses from their income taxes.

The president issued a series of tweets Wednesday, culminating with calling the story “a highly inaccurate Fake News hit job!”

“Real estate developers in the 1980’s & 1990’s, more than 30 years ago, were entitled to massive write offs and depreciation which would, if one was actively building, show losses and tax losses in almost all cases. Much was non monetary. Sometimes considered “tax shelter,” Trump said. “You would get it by building, or even buying. You always wanted to show losses for tax purposes….almost all real estate developers did – and often re-negotiate with banks, it was sport.”

One of the president’s lawyers, Charles Harder, told the newspaper that the tax information it used was “demonstrably false.”

“IRS (Internal Revenue Service) transcripts, particularly before the days of electronic filing, are notoriously inaccurate … would not be able to provide a reasonable picture of any taxpayer’s return,” he told the Times.

House Democrats are trying to get their hands on Trump’s tax returns from 2013 to 2018 as part of their investigation into the president’s foreign business deals.

Treasury Secretary Steven Mnuchin has so far declined, saying the request has no “legitimate legislative purpose.”