US Senate Leader: Time to Move on From Mueller Report 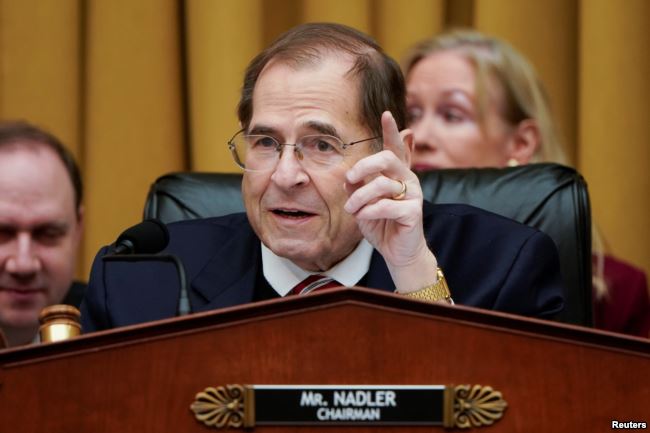 WASHINGTON — U.S. Senate Republican leader Mitch McConnell says it is time for lawmakers to move on from the lengthy investigation of Russian meddling in the 2016 presidential election, despite House Democrats’ expansive efforts to investigate President Donald Trump and his administration.

“Case closed,” McConnell said on the Senate floor. He derided what he said was the “outrage industrial complex” of Democrats and television news show pundits over special counsel Robert Mueller’s conclusion that Trump did not collude with Russians to help him win.

“The investigation went on for two years,” he said. “It’s finally over.”

Mueller’s report remains at the center of a dispute in the Democratic-controlled House of Representatives. Congressman Jerrold Nadler says the House Judiciary Committee he heads will vote Wednesday on whether to hold Attorney General William Barr in contempt for refusing to turn over an unredacted copy of the 448-page report.

Nadler, however, says he will meet with officials from the Department of Justice as the two sides work to resolve the dispute over whether lawmakers can see the unfiltered report, or at least a large portion of it.

“It remains vital the committee obtain access to the full, unredacted report and the underlying materials,” Nadler said in a statement late Monday. “The committee remains committed to finding a reasonable accommodation.”

The action by Nadler toward a contempt of Congress vote against Barr marked another escalation of the rancor by the Democrat-controlled House of Representatives against Trump, a Republican, and his administration.

On Monday, Treasury Secretary Steven Mnuchin rejected the demands of another House committee for six years of Trump’s personal income tax returns. In addition, House Democrats are pushing to have Mueller testify about his handling of the investigation and also Donald McGahn, the former White House counsel, about his dealings with Trump.

Barr has said he had no objection to letting Mueller testify before Congress about his investigation. But Trump on Sunday changed his mind, saying, “Bob Mueller should not testify. No redos for the Dems!” No agreement has been reached for Mueller’s testimony.