US Democrats Move to Hold Attorney General Barr in Contempt 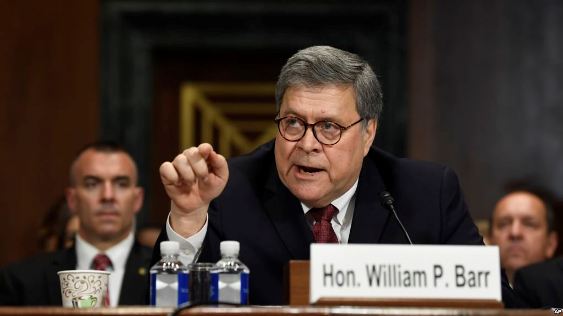 The U.S. House Judiciary Committee moved Monday to hold Attorney General William Barr in contempt of Congress for refusing to turn over an unredacted copy of special counsel Robert Mueller’s report on his investigation into Russian meddling in the 2016 presidential election.

Congressman Jerrold Nadler, the panel’s chairman, said the committee would vote Wednesday on the contempt citation, a new escalation of the rancor between the Democrat-controlled House of Representatives and President Donald Trump, a Republican, and his administration that Democrats are trying to investigate.

Barr last month released a redacted copy of the 448-page report, concluding that neither Trump nor his campaign colluded with Russia to help him win the White House, but reached no conclusion whether Trump, as president, obstructed justice by trying to thwart the prosecutor’s 22-month investigation. Barr decided on his own that the findings did not warrant obstruction charges against the president.

One analysis found that about 7% of the report was redacted, with the most material deleted about Russian attempts to influence the election in Trump’s favor by posting false and misleading material on American social media accounts and Russia’s role in hacking top Democrats’ emails and releasing them to the public.

Nadler says his committee is entitled to see what was redacted, but the Justice Department, the agency headed by Barr as the country’s top law enforcement official, said last week the panel’s request for the information was “not legitimate oversight” and an “overbroad and extraordinarily burdensome” request.

If the Democrat-controlled Judiciary Committee approves the contempt citation, it would be taken up by the full House of Representatives. In theory, someone held in contempt could eventually be tried and, if convicted, face up to a year in prison. The Justice Department rarely pursues such referrals from Congress.

“They know the Justice Department is working to negotiate even as they pursue contempt charges, making their move today illogical and disingenuous,” Collins said. “Democrats have launched a proxy war smearing the attorney general when their anger actually lies with the president and the special counsel, who found neither conspiracy nor obstruction.”

Barr last week testified before a Senate committee about his role in overseeing the last stages of the Mueller investigation, but refused to testify before Nadler’s panel in a dispute over whether the committee’s staff attorneys would be allowed to question him.

Barr said he had no objection to letting Mueller testify before Congress about his investigation. But Trump on Sunday changed his mind, tweeting that “Bob Mueller should not testify. No redos for the Dems!”