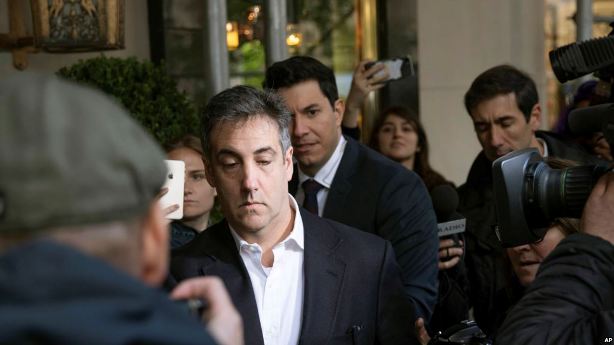 Michael Cohen, U.S. President Donald Trump’s one-time personal attorney and political fixer, headed to prison Monday to begin a three-year sentence, in part for helping pay off two women to keep quiet before the 2016 election about affairs they allegedly had with Trump a decade before he ran for the White House.

The 52-year-old Cohen, now disbarred as a lawyer, is reporting to a minimum-security Federal Correctional Institution in Otisville, New York, 120 kilometers northwest of New York City, where he worked for Trump for more than a decade.

As he left New York City, Cohen unleashed a parting shot at Trump, saying he hoped that once he completes his sentence, “the country will be in a place without xenophobia, injustice and lies at the head of our country. There still remains much to be told. And I look forward to the day that I can share the truth.”

Cohen was the in-house lawyer for the Trump Organization, the real estate mogul’s global business empire. After Trump entered politics, he was a regular on cable television news shows brashly defending his boss whom he once said he would “take a bullet” for.

But that life fell apart as special counsel Robert Mueller and other federal prosecutors started investigating Trump and his campaign’s links to Russia and whether Trump, as president, obstructed justice by trying to thwart Mueller’s probe.

Mueller has cleared Trump and his aides of colluding with Russia, although the prosecutor did not reach a conclusion on obstruction, even as Attorney General William Barr decided there was not enough evidence to warrant obstruction charges against the president.

Cohen was mentioned in Mueller’s report more than 800 times.

Cohen pleaded guilty to financial crimes, allegations that he facilitated a combined $280,000 in hush money payments to two women, and also for lying to Congress about the length of time Trump was trying to reach a deal in Moscow to build a skyscraper there. Trump has long denied sexual encounters with the women.

Five men in Trump’s orbit have pleaded guilty or been convicted of an array of offenses and another faces a trial later this year. Among the Trump aides, Cohen’s three-year term is second only to the 7.5-year sentence handed out to former Trump campaign chairman Paul Manafort, who was convicted of several financial crimes.

For awhile after Cohen’s New York offices and the hotel where he was staying were raided by federal authorities in April 2018, Trump stayed in contact with Cohen, saying he did not believe he would flip in his loyalty to Trump and turn against him. Trump called Cohen a “fine person with a wonderful family.”

But within months, Cohen declared that his first loyalty was to his family and his country, not Trump.

Their relationship turned distinctly icy after Cohen told a congressional panel early this year that he came to realize that his long efforts putting the best light on Trump’s actions and life were misguided.

“I am ashamed that I chose to take part in concealing Mr. Trump’s illicit acts rather than listening to my own conscience,” Cohen testified. “I am ashamed because I know what Mr. Trump is. He is a racist. He is a conman. He is a cheat.”

Trump in turn called Cohen “weak” and a “rat.”

Washington pundits had once suggested that Trump would eventually pardon Cohen to free him from his prison term. But as Cohen headed to prison Monday, Trump, who comments on issues large and small throughout the day on Twitter, made no mention of his one-time aide.