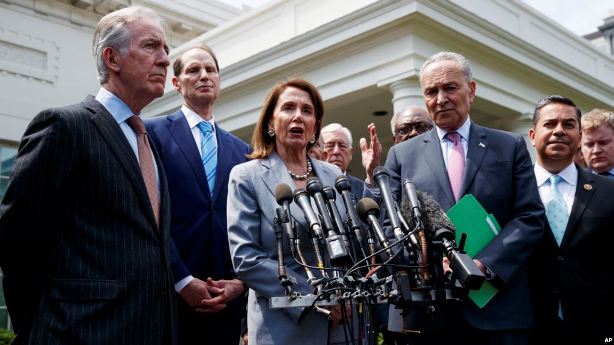 WHITE HOUSE — There has been a rare instance of agreement between opposition Democrat leaders in Congress and the administration of President Donald Trump. The two sides are pledging to work together on creating a huge infrastructure package.

House Speaker Nancy Pelosi, standing alongside Senate Minority Leader Chuck Schumer outside the White House, told reporters they and the president on Tuesday agreed on a number — two trillion dollars in funding for infrastructure projects that will include fixing roads, bridges and waterways, as well as improving the power grid and broadband access.

“Building infrastructure of America has never been a bipartisan issue,” said Pelosi. “And we hope to go forward in a very non-partisan way for the future.”

The Democrats say they will meet again with the president in about three weeks to discuss how the infrastructure projects will be funded.