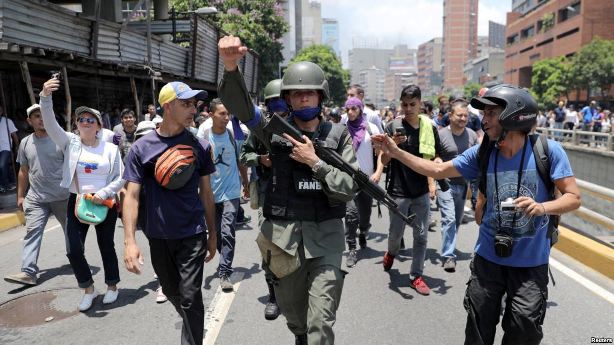 Venezuela’s socialist government said Tuesday that an “attempted coup” was underway in Caracas, with opposition leader and U.S. recognized interim president Juan Guaido saying there was “no turning back” in his efforts to overthrow President Nicolas Maduro.

Thousands of demonstrators took to the streets of the capital, with gunfire erupting and troops loyal to Maduro firing water cannons at protesters. Television footage showed one Venezuela National Guard vehicle running over demonstrators who were throwing rocks at the military.

In Washington, U.S. President Donald Trump said on Twitter he was “very closely” monitoring the situation, adding, “The United States stands with the People of Venezuela and their Freedom!”

“We want a peaceful transition of power,” Bolton said.

He declared, “The moment is now! The 24 states of the country have taken the path, no turning back, the future is ours. People and the Armed Forces united by the cessation of usurpation.”

But Maduro responded on Twitter, saying, “Nerves of Steel! I have spoken with the commanders of all the (defense regions and operational zones), who have expressed their total loyalty to the People, the Constitution and the Fatherland. I call for the maximum popular mobilization to assure the victory of Peace. We will overcome!”

But the government’s communications minister, Jorge Rodriguez, said on Twitter, “We are currently facing and deactivating a small group of treacherous military personnel who took positions” near a military base “to promote a coup d’etat. We call on the people to remain on maximum alert to — with our glorious National Bolivarian Armed Forces — defeat the attempted coup and preserve peace.”

Maduro loyalists fired tear gas at demonstrators outside a military base.

Guaido appeared alongside opposition politician Leopoldo Lopez who had been put under house arrest by Maduro but said he had been “freed” by soldiers supporting Guaido.

Lopez posted a picture of men in uniform on Twitter, with the message, “Venezuela: the definitive phase to end the usurpation, Operation Liberty, has begun.”

Defense Minister Lopez asserted on Twitter that the situation in the military barracks and bases in the country was “normal” and that the military was “firmly in defense” of Maduro.

Despite widespread food and medical shortages and a failing economy in Venezuela, the socialist Maduro regime has clung to power with the support of most of the country’s military.Venezuela’s two biggest creditors, Russia and China, also have continued to support Maduro. But Bolton said, “We expect the Russians not to interfere.”

Meanwhile, the U.S., one of about 50 countries that has recognized Guaido as the country’s legitimate leader, has imposed sanctions on Caracas in an effort to curb its international oil sales.

Colombian President Ivan Duque called on Twitter for “soldiers and the people of Venezuela to place themselves on the right side of history, rejecting dictatorship and Maduro’s usurpation.”

Spain, which also recognizes Guaido as Venezuela’s legitimate leader, said it did not support a military coup.Madrid said, “We … have no doubt that the solution for Venezuela has to come hand in hand with elections.Spain does not support any military coup.”