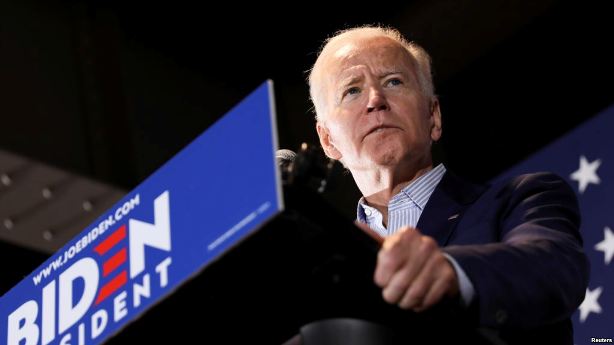 In a new Quinnipiac University poll, Biden has jumped to 38%, up from 29% in March. Massachusetts Sen. Elizabeth Warren places second with 12%, followed by Sanders at 11% and South Bend, Indiana, Mayor Pete Buttigieg at 10%.

Trailing behind in single digits in both polls were California Sen. Kamala Harris and former Texas congressman Beto O’Rourke. The remainder of the field was largely at 2% or less.

Biden also got a bump in the latest Morning Consult poll where he now leads Sanders by a margin of 36% to 22%.

On Monday, Biden held his first campaign rally in Pittsburgh and left no doubt he will target what he says is the divisive presidency of Donald Trump.

“We have to let them know who we are. We Democrats and we independents who have the same view have to choose hope over fear, unity over division, and maybe most importantly, truth over lies,” Biden told a cheering crowd of supporters and labor activists.

In his speech, Biden laid out three main reasons for his candidacy.

Biden supporters in Pittsburgh were out early for the Monday event, including Marsha Williams.

“I think Joe Biden is the guy with experience, and I think he is a good guy with an honest heart. And that really means the most to me,” she said.

On ABC’s “Good Morning America” Tuesday, Biden blasted Trump’s governing style and said he would “end this God-awful deliberate division” that the president has pursued to “aggrandize his own power.”

In the interview, Biden was also pressed by GMA anchor Robin Roberts about several recent allegations from women who interacted with him but who felt uncomfortable with his close, intimate style. When asked if he really understood their complaints, Biden, who was accompanied in the interview by his wife, Jill, responded, “I really do.”

Trump on the attack

Trump has also been busy on the campaign trail.

At a rally in Wisconsin on Saturday, he launched a general barrage against the Democratic Party.

“So, Democrats are now the party of high taxes, high crime, open borders, late-term abortion, hoaxes and delusions. The Republican Party is the party for all Americans. That is what it is. It really is. And common sense.”

Trump has gone after Biden on Twitter and likes to highlight Biden’s age by referring to him as “Sleepy Joe.”

“I am a young, vibrant man. I look at Joe. I don’t know about him. I don’t know,” Trump told reporters outside the White House last week.

Even though Biden is now seen as the clear front-runner in the Democratic field, some Democrats argue that merely defeating Trump next year will not do much to fix what is wrong in the country.

Sanders is among those arguing that the nation needs sweeping change.

“Our job is not just to win the White House. It is to transform the economy and government of this country,” he told a rally in Texas last week.

“The field is much wider and open. And as for Biden, you know, it is just too early for the polls to really mean all that much, other than Biden has good name recognition and there is some affection for him.”

Who can beat Trump?

Democrats can pick from a rich and diverse field of candidates for 2020 that include several female contenders, as well as minorities.

But many Democrats appear most interested in one key question, according to American University analyst Bill Sweeney.

“We have the most diverse field in the history of the country, and Democratic voters have a great deal to choose from. But the other question that the Democrats are going to be looking at as candidates contest in the primaries is, ‘Is this the person who can beat Donald Trump in 2020?’”

So far, Democratic voters asking that question appear to prefer Biden, and analysts say that is the key reason for his recent surge in the polls.

In the CNN poll, 46% of Democratic voters said it was “extremely important” to nominate a candidate with a good chance of beating Trump.

In the latest Quinnipiac poll, 56% said Biden had the best chance to beat Trump, followed by Sanders at 12%.

In a statement accompanying the Quinnipiac poll, assistant polling director Tim Malloy said the results are “a very clear indication” that Democrats see Biden as the candidate who can “send President Trump packing 18 months from now.”

Trump’s average approval rating is about 43%, according to a sampling of recent polls.

A Morning Consult/Politico poll from mid-April found Biden leading the president in a head-to-head matchup by a margin of 42% to 34%, with 19% undecided.