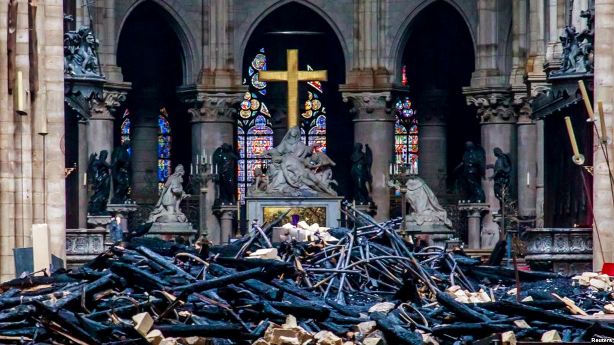 PARIS — Just a couple of days ago, Severine Vilbert strolled by Notre Dame with her eldest daughter on a chilly but brilliantly sunny day. The blossoms were out and the cathedral glistened in the light.

“We were looking at Notre Dame and saying, ‘Wow, it’s such a beautiful monument, how proud we were to be Parisian and live in this beautiful city,'” Vilbert recalled, not bothering to fight back tears. “And then, it was like a nightmare for us.”

On Tuesday, Vilbert retraced her footsteps in a transformed Paris. A few drops of rain fell from a slate grey sky, as she joined thousands of Parisians and tourists paying a vigil of sorts to a smoking-but-still-cherished icon.

The inferno that raced through the more than 850-year-old cathedral Monday night destroyed most of the roof. Its 90-meter (295-foot) spire collapsed in the blaze, causing selfie-snapping onlookers to gasp.

Investigators are scouring for clues from the fire that they consider likely, for the moment, accidental.

“I’m a Christian. I’m a Catholic. I think it’s really terrible about what’s happened,” George Castro, a French-Colombian, said of the blaze that occurred just a week before Easter. “It’s really, really sad.”

But amazingly, no lives have been lost and priceless treasures were saved, along with Notre Dame’s stunning rose window. Reports quoted experts assessing the building as structurally sound.

The fire is the latest assault on one of the world’s most beautiful cities. Over the past few years, Paris has weathered two massive terrorist attacks that bookended 2015, and most recently the yellow vest crisis that defaced some of its most prestigious landmarks and deeply divided French citizens.

Some Parisians, like Nicolas Chouin, believe the blaze can help to reconcile a fractured France.

“It’s something beyond us, beyond our little problems of everyday life,” he said, gazing at the skeleton of the cathedral’s roof. “Of course, it doesn’t solve all the political issues — let’s see if it’s just a parenthesis.”

President Emmanuel Macron canceled a major address to the nation Monday night, in which he was expected to outline measures to assuage the yellow vest anger, to race to the scene of the fire.

“We will rebuild the cathedral even more beautiful,” he vowed on Tuesday, promising to restore the edifice within five years.

“We’re French, we’re proud of being French, and we’re going to rebuild it,” Vilbert said. “It’s going to take many years, but it’s going to be great.”

Tourists and foreign residents, who flock to the French capital yearly by the millions, are just as devastated.

Staring at the charred remains, retired Paris firefighter Philippe Facquet offered an expert assessment of the challenges that faced his former colleagues.

“Attacking this kind of fire is very difficult,” he said, “because there are narrow spiral staircases, so carrying hoses and other heavy material is very difficult. And the adjacent roads are very narrow — so a lot of complications.”

Then Facquet offered his personal assessment — that he felt “very bad.”

“It’s our mother, it’s our patrimony, it’s the symbol of Paris,” he said. “Our heart is bleeding.”