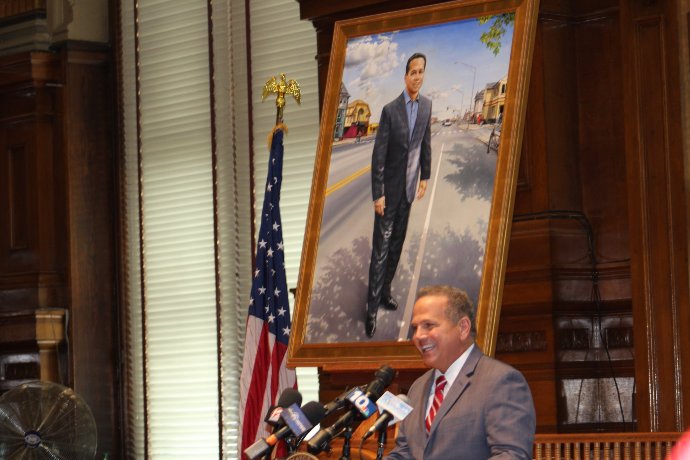 PROVIDENCE – Governor Gina Raimondo, Providence Mayor Jorge Elorza, elected officials, business, nonprofit and community leaders and Providence residents joined U.S. Congressman David Cicilline to unveil his official mayoral portrait on Sunday, April 14. Cicilline, the 36th Mayor of Providence, ushered in a new era of city government, one that worked for the people, not just connected insiders. The mayoral portrait, completed by Agustín Patiño, is the first commissioned by a Latino artist and the first to depict the mayor outside of city hall.

“It was the honor of my life to serve the residents of Providence as mayor. An honor that would not have been possible without the support of the residents of the city, and the hard work of everyone who served in my administration,” said U.S. Congressman and former Providence Mayor David N. Cicilline. “It is overwhelming and humbling to think that, many years from now, this portrait will remain after I have long passed. But, when future generations see this painting, I want them to look beyond me and think of the vibrant neighborhoods of this city, the first responders who put their lives on the line, the men and women who serve tirelessly everyday to keep Providence running, and the residents, businesses owners, and families that make the City of Providence a welcoming and thriving place to call home.”

During his eight-year tenure, downtown Providence saw a resurgence of growth, including construction of the Westin Tower, the GTech Building and the Waterplace Towers. Equally important was the nearly $1 billion invested in the city’s neighborhoods, which led to new affordable housing, parks and green space; resurfaced roads and cleaner streets; and revitalization across the city’s neighborhoods through new development and main street investments.

“I was proud to be one of David Cicilline’s constituents when he served as Mayor of Providence, and I’ve been fortunate to work with him in the years since as he’s represented Rhode Island’s first congressional district with honor in the House of Representatives,” said Governor Gina M. Raimondo. “His steady moral leadership, tenacity and passion for improving his community put Providence on a path to the undeniable progress we’ve seen for the last fifteen years.”

“Mayor Cicilline did a lot for the City and he did a lot for Latinos,” said Providence City Council President Sabina Matos. “He was the first politician in Rhode Island to truly engage the Latino community, invest in getting out the Latino vote and, during his two terms as Mayor, follow through on his promises to this community.”

Cicilline reoriented city government to meet the needs of its people, starting with the reinvention of the City’s police department. Mayor Cicilline worked diligently to rebuild trust between residents and law enforcement, instituting community-based policing and data-driven crime prevention efforts that led to the lowest crime rate in three decades. Fiscal responsibility was paramount during his administration, which reduced management positions by double digits, fully funded the annual contribution to the pension system for the first time in years and ushered in top bond ratings from major agencies for the first time ever. And, committed to supporting families and youth, Cicilline built a network of high-quality after school programs and launched efforts to move families out of poverty and into the middle class. As mayor, David Cicilline sent the message to residents and businesses that Providence was a sound investment and the City was a reliable partner again.

“When David Cicilline launched the Providence After School Alliance (PASA) in 2004, little did we know he would become the leading local and national after school champion,” said Providence After School Alliance Executive Director Hillary Salmons. “His PASA creation has since been led by three Providence mayors who have expanded his legacy and has inspired over 30 similar models in over 30 cities around the country from Nashville and Richmond to Tulsa and Detroit. Mayors and youth organizations around the country are grateful to our Mayor and Congressman for putting youth at the center of his public life. There are thousands of youth and cities benefiting from his leadership.”

The Providence After School Alliance, a public-private partnership, has served over 15,000 youth in the city, established quality standards for the entire state and became a national field model.

“David Cicilline helped move both the State of Rhode Island and the City of Providence from notorious political corruption toward accountable government. After three centuries of virtually unchecked legislative control, he became one of the first to fight for constitutional separation of powers,” said H. Phillip West, Executive Director of Common Cause RI (1988-2006). “He also fought for strong ethics at the state level and in the City of Providence. Both as a state representative and as mayor, he challenged a corrupt status quo and made powerful enemies. He helped win durable and historic reforms.”

Mayor Cicilline appointed an ethics task force to draft a comprehensive ethics code for the city. The City professionalized the hiring process based on merit and instituted an honorable service precedent, stripping pensions from employees who violated the public trust.  The new portrait depicts Mayor Cicilline as he would want to be remembered best: in the thriving neighborhoods of the city he loved and served.

“In the painting I have tried to integrate the former mayor, the community and the city as a natural part of the dynamics of Providence’s art and culture,” said artist Agustín Patiño. “The former mayor is much loved in the Latin American community; it was an honor to be the first Latin American artist commissioned to paint such an important portrait.”

Artist Agustín Patiño is heavily influenced by his native Ecuador, having lived in the Amazon region, one of the most unique landscapes in the world. Patiño moved to the United States and relocated to Providence. His current public artwork includes a series called the Four Elements, which includes The Plaza of Art and Cultures and The Dialysis of the Planet located in South Providence and Museo del Aire / The Air Museum located at the Wheeler School on the Eastside of Providence. He works directly with the community through artist talks, panel discussion and workshops.

As Patiño explains: “the murals are important to the community and neighborhoods; these murals are their museums, which represent them.”

Prior to his time as mayor, Cicilline served four terms as a state representative from Providence. He is a graduate of Brown University and Georgetown University Law Center. He is currently serving his 5th term in the U.S. House of Representatives.