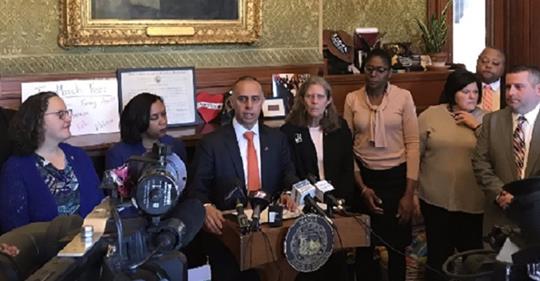 On Thursday, March 4, 2019, Providence Mayor Jorge Elorza announced that he is backing away from a plan to privatize the city’s water system. The Land and Water Sovereignty Campaign, along with community activists across the state, have led the call to keep Providence’s water in public hands.

Since February, the Rhode Island state legislature has considered legislation to enable the privatization of the Providence Water Supply Board. With his announcement today, the mayor requested that the bill sponsors remove it from consideration.

“We are glad to hear of Mayor Elorza’s decision to stop all legislative efforts towards monetization and privatization of our water,” said Cristina Cabrera, AKA Chunchip Deer Spirit, Core Team Member, Water Is Life – Land & Water Sovereignty Campaign & Environmental Justice Director of Indigenous Affairs, Pocasset Pokanoket Land Trust. “As indigenous people, our care and our responsibility lies in protecting our land and water from any form of commodification, capitalization or privatization. This is the beginning of a long road to ensure that our water remains protected for future generations. We welcome the opportunity to work with the City of Providence on a participatory budgeting process for its financial concerns, but Water is not up for lease or sale. Mni Wiconi.”

“As a member of the core group of the Land and Water Sovereignty Campaign, a Standing Rock water protector, and 30-year resident of Rhode Island, I would like to thank everyone who diligently participated to stop the monetization of our water supply, that provides 60% of Rhode Islanders with potable drinking water,” said John Gonzalez of the Pimicikamak Cree Nation. “This is not the end. This is only the beginning for Land and Water Sovereignty, our indigenous and most heavily impacted communities.”

“We are glad to be working in collaboration with the Land & Water Sovereignty Campaign to protect the interest of our water,” said Sequan Pijakì, aka Chief George Spring Buffalo, Chief Executive Officer, Pocasset Pokanoket Land Trust. “The purpose of the Pocasset Pokanoket Land Trust is to advocate for indigenous lands to ensure rightful stewardship and protection of our territorial lands and water. We celebrate the Mayor’s decision to stop all legislative efforts towards monetization and privatization of our water. It is of utmost importance to hear the cries of our Mayan Ancestors in support of Indigenous land and water sovereignty.”

“Water is a human right, and efforts to commodify it run counter to the public good and do great harm to all, but especially the most vulnerable in our communities,” said Gillian Kiley, Cranston resident. “I am grateful for the leadership of City Council members like Rachel Miller, Kat Kerwin, and Seth Yurdin on this issue, and am pleased that Mayor Elorza heard the broad opposition voiced by the community and responded by withdrawing support for these bills. Going forward, the city of Providence and the state of Rhode Island must recognize that water is a precious, essential public resource that cannot be commodified.”

“Leasing or selling water is just a roundabout way of making Rhode Island residents pay for a problem they didn’t cause with their water bills, housing stability, and health,” said Janice Gan, resident of Providence. “A better approach would come from the ground up, through the leadership of the Indigenous people who have long managed this watershed and the frontline communities who are already being harmed by poor infrastructure, toxic facilities, and an ongoing history of extraction and exclusion.”

“We are glad that the mayor has listened to the community, and hope this will be the beginning of a process in which Rhode Islanders, the region’s Indigenous people, and city, town and state legislators will work together to ensure safe, clean, accessible and affordable water for all for years to come,” said Providence resident Kate Schapira.

“We applaud Mayor Elorza for listening to the overwhelming community opposition to privatization, and for making the right decision to be a champion for public water,” said Food & Water Watch Senior Northeast Organizer Nisha Swinton. “The city’s water system is too vital to lease off to the highest bidder. These privatization deals result in higher rates and diminished service, and leave ratepayers paying off what is essentially a high-interest loan for decades to come. Providence should seize this opportunity to find a solution to its financial challenges that protects its public water system and honors its commitments to public workers.”

“This is a clear victory for people in Providence and across the state. It’s just the latest in a string of cities around the globe that have cast out privatization and affirmed the human right to water,” said Corporate Accountability Senior Water Organizer Alissa Weinman.“Given the industry’s track record of rate hikes, labor abuses, and corner cutting that jeopardizes public health, privatization in Providence threatened both communities and the city, all in the name of profits. From Lagos to Pittsburgh to Providence, people are sending a clear message to the private water industry: ‘Water is for people, not for profit.’”

The Poor People’s Campaign Steering Committee released this statement: “We are committed to lifting up and deepening the leadership of those most affected by systemic racism, poverty, the war economy, and ecological devastation and to building unity across lines of division. In this spirit we join in support of the Water Is Life – Land and Water Sovereignty Campaign to protect the interest and indigenous sovereignty of territorial land and water. Water is life and neither water nor people are up for lease or sale.”