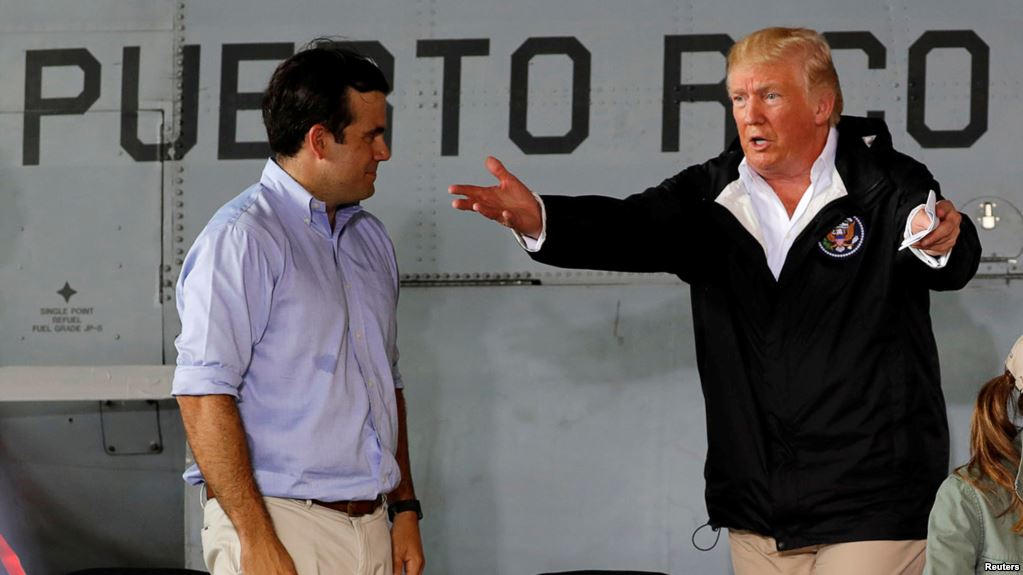 WASHINGTON — U.S. President Donald Trump is lashing out at the country’s territory of Puerto Rico, contending that its leaders are incompetent, foolish and corrupt in overseeing its recovery from two devastating 2017 hurricanes.

Trump complained Tuesday that the Caribbean island is getting $91 billion in government assistance to help it rebuild from hurricanes Irma and the more powerful Maria, which may have killed nearly 3,000 people, although the aid figure is a 20-year projection. About $11 billion has been spent on the island of $41 billion in announced federal government recovery funding.

The U.S. leader claimed that Puerto Rico, whose 3.2 million residents are American citizens, has gotten “more money than has ever been gotten for a hurricane before, & all their local politicians do is complain & ask for more money. The pols are grossly incompetent, spend the money foolishly or corruptly, & only take from USA.”

Trump assailed opposition Democratic lawmakers in the Senate for refusing to vote Monday for a $13 billion Republican natural disaster relief aid plan that included $600 million in food assistance to Puerto Rico, although the rest of the money would have gone for recovery efforts in mainland U.S. states hit by hurricanes, wildfires and flooding.

“The best thing that ever happened to Puerto Rico is President Donald J. Trump,” he said. “So many wonderful people, but with such bad Island leadership and with so much money wasted. Cannot continue to hurt our Farmers and States with these massive payments, and so little appreciation!”

After the Senate failed to advance either the Republican disaster relief bill or a similar measure approved by the Democratic-controlled House of Representatives, Trump said Democratic lawmakers “killed a Bill that would have provided great relief to Farmers and yet more money to Puerto Rico despite the fact that Puerto Rico has already been scheduled to receive more hurricane relief funding than any ‘place’ in history.”

He said money spent on Puerto Rico is “taking dollars away from our Farmers and so many others. Disgraceful!”


He said, “Puerto Rico got far more money than Texas & Florida combined, yet their government can’t do anything right, the place is a mess – nothing works.

Trump said federal relief workers and the U.S. military “worked emergency miracles, but politicians like the crazed and incompetent Mayor of San Juan (Carmen Yulín Cruz) have done such a poor job of bringing the Island back to health.”

Last week, Puerto Rico Gov. Ricardo Rossello, angered by Trump’s complaints about relief aid to the island, told CNN, “If the bully gets close, I’ll punch the bully in the mouth. It would be a mistake to confuse courtesy with courage.”

After Trump referred to the island as a “place,” Rossello said, “Mr. President, this ‘place’ you refer to, #PuertoRico, is home to over three million proud Americans that are still recovering from the storm and in need of federal assistance. We are not your adversaries, we are your citizens.”