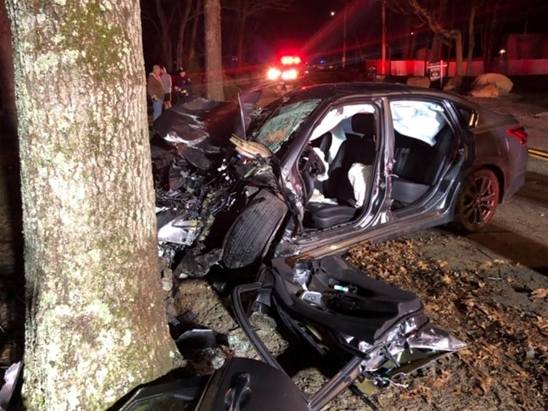 Colonel Michael J. Winquist, Chief of the Cranston Police Department, announces that the department’s Traffic Division is investigating a single car crash that occurred on March 31, 2019, at approximately 8:45 PM.  The crashoccurred on Olney Arnold Road in the area of Oakridge Drive.

A vehicle described as 2018 Nissan Altima with three occupants, including a ten-year-old boy seated in the rear of the vehicle, was traveling westbound on Olney Arnold Road.  A preliminary investigation reveals that the vehicle approached a slight curve in the road that veered to the left and was unable to maintain control. The vehicle went off the road onto the shoulder, crossed the driveway at 183 Olney Arnold Road, striking the residence mailbox and concrete footing.  The vehiclethen continued forward and struck a large tree, approximately 2-3 feet in diameter.  The vehiclestruck the tree with such force that the rear end of the vehicle catapulted upward striking the tree as well.  Cranston Fire and Special Hazards used hydraulic jaws to extract the driver from the vehicle, who was not wearing a seat belt.  A front seat passenger was seat belted in the vehicle when fire personnel arrived. A 10-year-oldboy who was the back seat passenger, was out of the vehicle walking around when police arrived and is believed to have beenwearing his seat belt at the time of the crash.

The operator of the vehicle is identified as Glenn A. Teolis, age 47, of 15135 Bridgewater Crossing Boulevard, Winter Garden, FL. Mr. Teolis and the front seat passenger remain in critical condition at Rhode Island.  The ten-year-old passenger who is the son of Mr. Teolis sustained serious injuries and wastreatedand released from Hasbro Children’s Hospital. The vehicle sustained substantial damage.

Based on the preliminary investigation, it appears that speed was a factor in the crash. Possible operator impairment will be considered as part of the ongoing investigation with potential criminal and traffic charges being reviewed.