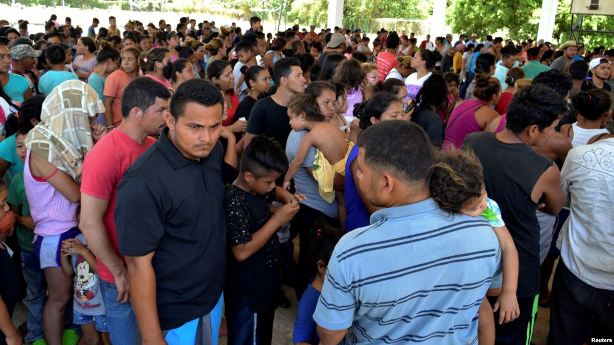 Photo: A general view shows migrants from Central America and Cuba waiting to be registered for humanitarian visas to cross the country on their way to the United States, in Acacoyagua, in Chiapas state, Mexico, March 27, 2019. ﻿

U.S. President Donald Trump is renewing his threat to close the country’s southern border, saying Mexico and three Central American countries are not doing anything to halt the surge of undocumented migrants heading north to try to enter the United States.

Trump first threatened to close the border last November, but did not follow through. However, as he ended a 35-day partial government shutdown in late January in a dispute with Congress over funding for a border wall, he declared a national emergency to build the barrier.While both houses of Congress rejected his declaration of a national emergency, the House of Representatives failed this week to override his veto of the measure, leaving the emergency declaration intact.

Trump is moving ahead with plans to extend the barriers along the border with funding that had been earmarked for other projects.

However, the fate of the national emergency declaration and more wall construction will likely be left up to U.S. courts. Sixteen states and other groups have filed suit to contest the declaration and Trump’s planned use of money allocated elsewhere.

The president’s latest threat to close the U.S.-Mexican border came a day after the top U.S. border official, U.S. Customs and Border Protection Commissioner Kevin McAleenan, said the influx of migrants at the border this month is at “the breaking point.”

He said authorities, after background checks of the migrants, are having to release them for lack of enough housing at the border.

McAleenan said because of the crush of migrants, the U.S., for the first time in more than a decade, is “reluctantly” freeing them into the United States with just a notice to appear later for an asylum hearing.

The migrants have not been required to wear ankle bracelets to track their movement.

He said the Border Patrol is on pace to arrest more than 55,000 family members this month — a more than 500 percent increase over the March 2018 figure.

Trump had previously accused Honduras, Guatemala and El Salvador of misusing U.S. foreign aid intended to alleviate poverty and curb crime in hopes of stemming the flow of migrants leaving those countries for the United States. He threatened in December to cut off that aid altogether.

More recently confusion over his tweets about the three countries had stalled delivery of the U.S. assistance.

U.S. Homeland Security chief Kirstjen Nielsen met Wednesday with leaders from the Central American countries about the funding and attempts to improve conditions there to help limit the number of people tempted to leave to try to seek asylum in the U.S.

On Thursday, Nielsen announced that the Central American countries had signed the memorandum of cooperation with the U.S.