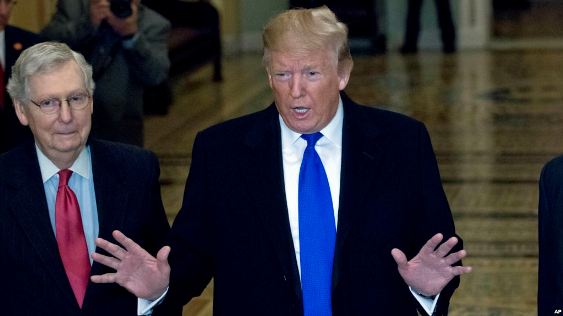 CAPITOL HILL — U.S. President Donald Trump lashed out at the U.S. mainstream news media Tuesday, saying it was being condemned throughout the world for its wide coverage of what he called the “Russia Collusion Delusion.”

Trump retweeted a supporter’s claim that the 22-month investigation by special counsel Robert Mueller should never have been opened. Attorney General William Barr, in a summary of Mueller’s conclusions, said Sunday the prosecutor had concluded Trump and his 2016 campaign had not conspired with Russia to help him win, but had reached no conclusion whether the U.S. leader obstructed justice by trying to thwart the investigation.

As Trump arrived at the Capitol for a luncheon meeting with Senate Republicans, he called the Mueller investigation “a ridiculous witch hunt, where it was proven very strongly, no collusion, no obstruction, no nothing.”

“I think what happened was a disgrace,” the U.S. leader said of the probe. “I don’t believe our country should allow this ever to happen again.”

But with the prosecutor clearing him of collusion allegations, Trump declared, “The Mueller report was great. It could not have been better.”

Next steps for Democrats

Meanwhile, Congressman Adam Schiff, chairman of the House Intelligence Committee, said top Democrats are considering what to do if Barr does not meet their demand to turn over the full Mueller report by next week.

“We hope they’ll comply,” Schiff said “A four-page summary that may be colored by the attorney general’s personal views is not adequate.”

A Justice Department official said Tuesday it will take Barr “weeks, not months” to finish reviewing the Mueller report and release a version to the public. But what is unclear is whether Barr will write up another summary, or make the entire report public.

House Judiciary Committee Chairman Jerrold Nadler has demanded Congress and the public see the entire report along with the evidence Mueller used to make his conclusions.

Trump’s attack on the news media, a grievance he has long voiced, came as he and Republican allies in Congress vowed to carry out their own investigations of his prominent critics and those behind the probe of links between his 2016 campaign and Russian efforts to disrupt the election.

“There are a lot of people out there that have done some very evil things, very bad things, I would say treasonous things against our country,” Trump said Monday, without specifying anyone in particular. “Those people will certainly be looked at.”

Mueller secured guilty pleas or convictions of five figures in Trump’s orbit for a variety of offenses and indicted a sixth who is awaiting trial. Among those convicted were Trump’s one-time campaign manager, Paul Manafort; his first national security adviser, Michael Flynn; and his longtime personal lawyer, Michael Cohen.

Senator Lindsey Graham, a Trump ally and the head of the Senate Judiciary Committee, promised Monday to “unpack the other side of the story” of the Mueller investigation and to look into how the Justice Department started it.

Trump claimed total exoneration, while opposition Democrats contended otherwise and demanded release of the full Mueller report. Barr said he will release more of it after confidential information contained in it is redacted.

On Monday, Senate Minority Leader Chuck Schumer of New York urged a Senate vote on a resolution calling for the release of Mueller’s full report. Majority Leader Mitch McConnell, a Kentucky Republican, objected, saying Barr must be given time to determine which portions of the report can be divulged without revealing classified information.

Graham said he hopes Barr will testify before his panel.