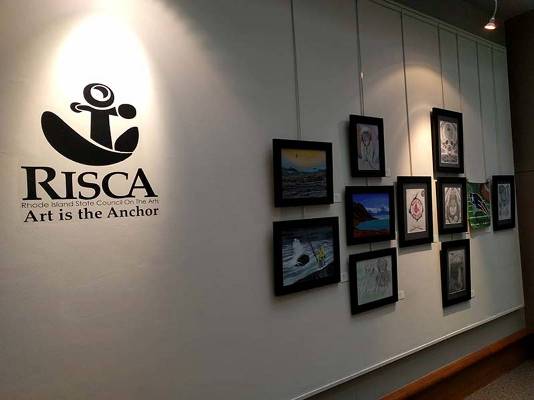 Providence, RI – “Art has helped me to see who I really am inside…” begins a statement from a former inmate at the Adult Correctional Institution (ACI) in Cranston.  The artistic expressions of current inmates at the ACI are on display from March 18 through May 4 at the Atrium Gallery at One Capitol Hill, a gallery space managed by the State Arts Council in the State’s Main Administration Building across from the Rhode Island State House.

This is the twenty-first annual exhibit of “Arts in Corrections”, a show featuring works of art by adults incarcerated at the ACI.  This year’s show features 46 works of art from 30 artists.  Work from Maximum Security and Medium Security will be on display.

The annual ACI Art Show has been extremely popular, judging from the comments left by visitors to the exhibit.  The work is strong, often introspective, and the artistic expression of the inmates often moves those who see it.

Marietta Cleasby, a volunteer with the ACI Education Program, organizes the show.  She says that the inmates work all year for this event, thinking and working on what they want to say to those who view their work.  She says, “it takes a great deal of courage” to share these works.  “Not only are [the inmates] telling you of their heroes, dreams and beliefs, but they are giving you their best work to be compared with all others.”

The Atrium Gallery at One Capitol Hill is a cooperative project between the State Arts Council and the State Department of Administration.  The Rhode Island State Council on the Arts is a state agency supported by appropriations from the Rhode Island General Assembly and grants from the National Endowment for the Arts, a federal agency.

About the Rhode Island State Council on the Arts

The Rhode Island State Council on the Arts is a state agency, supported by appropriations from the Rhode Island General Assembly and grants from the National Endowment for the Arts, a federal agency. RISCA provides grants, technical assistance and staff support to arts organizations and artists, schools, community centers, social service organizations and local governments to bring the arts into the lives of Rhode Islanders. For more information on RISCA and its programs, please visit www.arts.ri.gov.

About the Atrium Gallery at One Capitol Hill

The Atrium Gallery was developed by RISCA to exhibit the work of Rhode Island artists in the State Capitol Complex. It hosts exhibits on a rotating basis, in partnership with community artists and art organizations from across the state. The contemporary gallery frequently showcases artwork from a variety of diverse groups including Africa, Asia, Latin America, and the Native American community among others.

About the R.I. Department of Corrections

The Rhode Island Department of Corrections (RIDOC) contributes to public safety by maintaining a balanced correctional system of institutional and community programs that provide a range of custodial options, supervision and rehabilitative services in order to facilitate successful offender reentry into the community upon release. Our guiding operational philosophy includes maintaining appropriate safe, secure, and humane correctional environments while providing for community-based management, supervision, and intervention services for criminal offenders. The RIDOC’s six facilities currently house approximately 3,000 inmates, and the Department oversees about 23,000 men and women on probation and parole in Rhode Island.