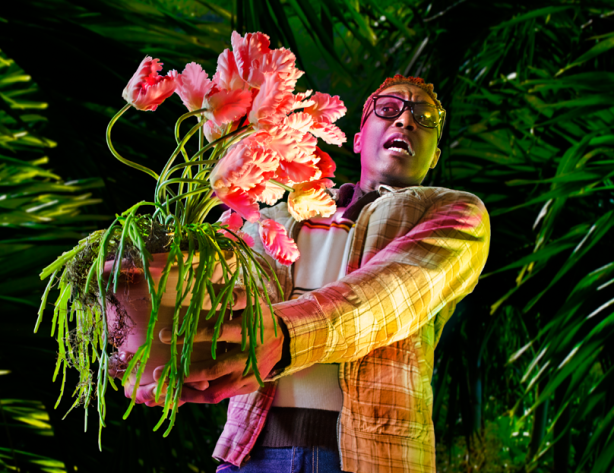 PROVIDENCE, RI: Trinity Rep will continue its 2018-19 Season with the perennially-popular Little Shop of Horrors – an award-winning musical that blends doo-wop, rock, and Motown in a totally twisted production about what lengths we are willing to go to when we are down on our luck. Directed by Tyler Dobrowsky, who was most recently at the helm of last spring’s Into the Breeches!, and the highly lauded A Midsummer Night’s Dream, this production sets the Skid Row flower shop in the middle of downtown Providence in the 1960s. Featuring resident acting company members Jude Sandy as Seymour and Rebecca Gibel as Audrey, Little Shop of Horrors runs April 11 – May 12 with press opening on Monday, April 15 at 7:30 pm. Tickets start at $25. More information can be found at www.trinityrep.com/littleshop

A strange and unusual plant seems like just the thing to save a beleaguered Skid Row flower shop and its hapless employees, Seymour and Audrey. But when that plant turns out to feed only on blood and is inclined toward world-domination, well… things get a little messy.

Director Tyler Dobrowsky says of the show, and setting it in Providence, “Little Shop of Horrors is one of my favorite American musicals ever written — the story is funny, charming and fantastic, and the music is completely irresistible. While the show is generally set in an urban “Skid Row” that resembles New York, I’m going to place this production here in Providence, RI. One, because I think Rhode Islanders like to see themselves on stage, and two, Rhode Island has a hard-scrabble, blue collar, optimistic underdog identity that matches the setting of Little Shop and its two main protagonists, Seymour and Audrey. (Rhode Island’s state motto is “Hope” after all.) I fully intend to honor the tone and style of this fun, funky classic, while hopefully adding a few small “Trinity Rep” surprises that will make our production unique.”

Director Dobrowsky has been a member of the education, literary, and artistic teams since 2003. He founded YASI (Young Actors Summer Institute), Trinity Rep’s summer program for children, as well as Teatro en El Verano Trinity Rep’s touring bilingual summer theater project, produced in partnership with Rhode Island Latino Arts. Directing credits at Trinity Rep include: Into the Breeches! a world premiere by George Brant; A Midsummer Night’s Dream; Julius Caesar; A Flea in Her Ear; It’s A Wonderful Life: A Live Radio Play; Love Alone (a world premiere with the playwright Deborah Salem Smith), and A Christmas Carol. Directing credits at the Gamm: The Big Meal, Morality Play, The Rant, American Buffalo and Incognito.

The cast of this production features resident company members Jude Sandy as the down-and-out Seymour, Rebecca Gibel as Audrey, Stephen Berenson as Mushnik, Timothy Crowe as ensemble, Janice Duclos as ensemble, Stephen Thorne as the dentist, and Rachael Warren as the voice of the plant. Brown/Trinity Rep MFA student Olivia Miller’19 will play in the ensemble and guest artists Carla Martinez, Elexis Morton, Kedren Spencer will join the cast as the “urchins”, Chiffon, Crystal, and Ronette with guest artist Taavon Gamble as Skip Snip. Ted Chylack will be the plant puppeteer.

THE MUSICAL AND ITS CREATORS

The musical is written by Howard Ashman (book and lyrics) and Alan Menken (music), whose other works includes Aladdin, The Little Mermaid and Beauty and the Beast.

COMMUNITY PARTNERSHIPS AND SPECIAL EVENTS FOR LITTLE SHOP OF HORRORS

Continuing Trinity Rep’s tradition of offering affordable tickets for all, the theater will have discounted previews of Little Shop of Horrors. Thursday, April 11 is a Pay What You Can performance. Pay What You Can tickets go on sale at 6:30 pm that evening, and are limited to one per person.

Other special performances for Little Shop of Horrors include an Open Captioned performance for the show on Sunday, April 14 at 2:00 pm and Wednesday, May 1 at 2:00 and 7:30 pm. The Next Generation Night will be held on Thursday, April 18 and includes a pre-show reception for the next generation of theater-goers. The Teens Talk performance will be held on Friday, April 19, which features Trinity Rep’s Teen Ambassadors discussing their perspective on the show following the 7:30 performance.

A Context & Conversation panel discussion will be held on Tuesday, April 23 at 6:30 pm at The Herbarium at 34 Olive Street in Providence. At this free event, panelists from the community will discuss a topic surrounding the show. Christina Bevilacqua, Trinity Rep’s conversationalist-in-residence will moderate the discussion

The production is supported by Washington Trust. The media sponsor is Rhode Island Monthly. The 2018-19 Season Sponsors are Ocean State Job Lot and Rhode Island Council on the Arts. Southwest Airlines is the official airline of Trinity Rep.