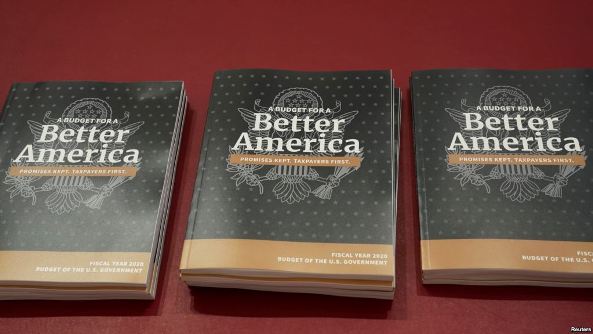 WASHINGTON — The White House on Monday unveiled a $4.7 trillion government spending plan for 2020, a request that includes President Donald Trump’s call for another $8.6 billion for his signature project, construction of a wall on the U.S.-Mexican border to thwart illegal immigration.

Trump’s request for border wall funding presages a new fight with lawmakers over the issue in the coming months during the third year of the Trump presidency. Key opposition Democratic lawmakers immediately vowed to block wall funding.

The Trump budget plan calls for a 5 percent funding boost for the Pentagon and a 5 percent cut in nonmilitary spending, while sparing popular programs providing health care and pensions for older Americans. Military spending would increase from $715 billion this year to $750 billion.

A senior Trump administration official said the plan calls for cutting “many, many programs that we consider wasteful.”

Even so, the Trump administration is predicting a $1.1 trillion deficit in the budget year starting in October, comparing spending to revenues from taxes and fees the government collects.

Trump lost the first round in his battle with Congress over wall construction money, with lawmakers rejecting any appropriation for the wall, while offering nearly $1.4 billion in money for barriers. That led Trump to declare a national emergency to bypass Congress and tap funds already allocated for other projects to build the wall.

Trump’s new request for wall funding comes just weeks after he ended a record 35-day partial government shutdown, a dispute that centered on his request for $5.7 billion for wall construction money. When lawmakers refused, he declared the national emergency.

House Speaker Nancy Pelosi and the Senate Democratic leader Chuck Schumer said in a joint statement Sunday they hoped the president had “learned his lesson” from the shutdown.

Trump “hurt millions of Americans and caused widespread chaos when he recklessly shut down the government to try to get his expensive and ineffective wall,” their statement said. “Congress refused to fund his wall and he was forced to admit defeat and reopen the government. The same thing will repeat itself if he tries this again. We hope he learned his lesson.”

But White House economic adviser Larry Kudlow said Sunday that Trump has justified his call for the wall’s construction, even though polls show a majority of voters oppose it.

Vought said the administration has “prioritized reining in reckless Washington spending” and shows “we can return to fiscal sanity.” But it would not balance the budget between spending and expected taxpayer funds for 15 years, long after Trump leaves office, even if he does win re-election next year.

In an interview with the Fox News Sunday show, Kudlow said, “It will be a tough budget. We’re going to do our own [spending] caps this year and I think it’s long overdue. … Some of these recent budget deals have not been favorable towards spending. So, I think it’s exactly the right prescription.”

U.S. presidents and Congress have traditionally squabbled over budgets, which spell out how to spend taxpayer dollars and the size of annual deficits.

The current 2019 budget is more than $4.4 trillion, with a deficit of about $1 trillion expected, largely because of Trump’s 2017 tax cuts.

There are signs the U.S. economy, which grew at a 2.9 percent pace last year, is slowing.

But Kudlow said he was not worried by some predictions the American economy will only advance a little in the first three months of this year and not much more than 2 percent this year.

“I’m not going to score it just yet,” Kudlow said. “I’ll take the over on that forecast. As long as we keep our policies intact, low tax rates for individuals and businesses, across the board deregulation, lighten the paperwork, let small businesses breathe and get a good rate of return. … Our policies are strong and I think the growth rate this coming year will exceed these estimates just as they have last year.”