From Stage to Service, Actor Gary Sinise a ‘Grateful American’ 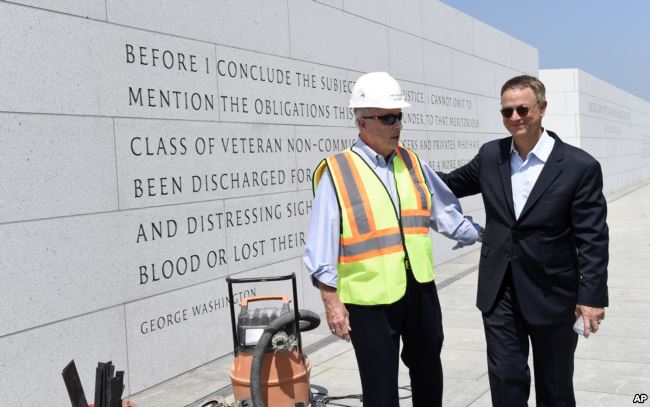 U.S. Army soldier Bryan Anderson was nearing the end of his second, yearlong tour of duty in Iraq, and approaching the end of his enlistment, when he unexpectedly reached a turning point on Oct. 23, 2005 — a date that is now seared in his memory.

A hidden improvised explosive device, or IED, cut through the military Humvee as Anderson was slowly driving through the dangerous streets of Iraq.

“When the explosion went off, it cut my legs and my hand off instantly,” he said.

Anderson credits the instant action by his comrades for saving his life, but his extensive wounds left him with one badly damaged arm and hand.

“Soldiers don’t think about coming back halfway,” he said. “You either think you are going to make it, or you’re not. I certainly did.”

Anderson’s evacuation from the battlefield marked the beginning of a long recovery at Walter Reed Army Medical Center in Washington, D.C. There, while trying to learn how to walk on prosthetic legs, he encountered many visiting celebrities, or “peer” visitors.

“Celebrities and peer visitors didn’t mean anything to me. I didn’t care. I felt more or less that these people would just come in, take pictures with soldiers, and say, ‘I did it! Look at me!’ It just felt like it was fake.”

But Anderson said one visitor who arrived in the middle of one of his intense therapy sessions was the exception.

“I’m trying to like, say, ‘Excuse me, can I get by?’ and then I tripped and hit somebody’s foot or something. And I fell forward, and I landed right into somebody. And I grabbed his chest, and he stood strong, and he held me up. And I pushed back and tried to stand up. And I’m like, ‘Oh holy crap, Gary Sinise!’ And he’s like, ‘Oh holy crap, the real Lieutenant Dan!'”

His performance as the rough Vietnam War soldier “Lt. Dan Taylor” in the 1994 Hollywood blockbuster “Forrest Gump” has, in part, defined Sinise’s career on and off camera.

Lt. Dan represented a generation of military veterans scarred by the Vietnam War, many of whom received a cold reception upon returning home to America.

Sinise’s portrayal of the wounded amputee and war-weary U.S. Army officer resonated with many veterans — something reinforced to Sinise during his visit to the 1994 Disabled American Veterans, or DAV National Convention in Chicago.

“The ballroom was filled with over 2,000 wounded veterans,” he explained to VOA during a recent interview in Chicago. “They were cheering for Lt. Dan, and the guy who played Lt. Dan, and I was overwhelmed with emotion. From that point on, I stayed actively involved with the DAV.”

While best known for his award-winning work as an actor, first on stage, then television, and eventually film, it is his service off-camera that is now earning Sinise the respect of many in uniform, prompted by what he describes as his own turning point — the terrorist attacks of September 11, 2001.

Despite not having served himself, he wanted to ensure the hard lessons learned during the Vietnam War weren’t repeated as a new generation of service members headed off for a new war.

“That they would go off to war responding to Osama bin Laden, and al-Qaida, and the attacks on our country, and they would return and feel appreciated.”

Today, Sinise shows appreciation through initiatives that include building homes for those injured in war through the Restoring Independence Supporting Empowerment, or RISE program of the Gary Sinise Foundation.

“I’ve been involved in building over 70 some houses for badly wounded service members,” he said. “I am a beneficiary of what our defenders do for us on a daily basis, so I want to support them in any way I can. Which is why I started the Gary Sinise Foundation.”

Today, the foundation that bears his name raises tens of millions of dollars annually to fund programs such as RISE, and the Snowball Express, which provides vacations at the Disney World Resort for Gold Star Families — those who have lost a loved one in combat.

To help fund the many philanthropic endeavors of his foundation giving back to those who served, including first responders and emergency personnel, Sinise performs around the world as a guitarist in the “Lt. Dan Band.”

His life on and off the many stages of his career, which began at the Steppenwolf Theatre he founded in Chicago in the 1970s, is all in his new book “Grateful American: A Journey from Self to Service,” now a New York Times best-seller.

Anderson, who appeared with Sinise on the TV show “CSI: New York” and now serves as an ambassador for the Gary Sinise Foundation, said it’s veterans like him who are the grateful Americans for Sinise’s attention and support.

“I got the sense that he felt a little guilty that he never served, and that he took the path that he did,” said Anderson, who is in the beginning stages of building his own accessible home through the RISE program. “But I try to tell him, ‘Look, we all serve in our own ways, and we try to do the best that we can. And you are more of a patriot than some of the guys that I served with.'”

It is a sentiment now documented in a heartfelt, viral online video featuring many notable Americans such as former Secretary of State Colin Powell, and Sinise’s “Forrest Gump” co-star, Tom Hanks, praising him for his service to others.

“I was just overwhelmed with emotion that people would take the time to do that,” Sinise explained to VOA. “I’m on a mission here, and I’m just trying to do what I can to support our military and veterans community.”

Sinise said the recognition is welcome and helps the overall work of his foundation.

“We still have people who are serving in harm’s way. They are still in the war zones. They are still getting hurt. We’re still losing them. It’s a dangerous world out there. They are deploying to places we still don’t even know about, and they end up getting hurt, or their families end up losing them, and I don’t want to forget them.”

« Hillary Clinton: Not Running for President in 2020
Our kids deserve to have financial literacy classes at school »