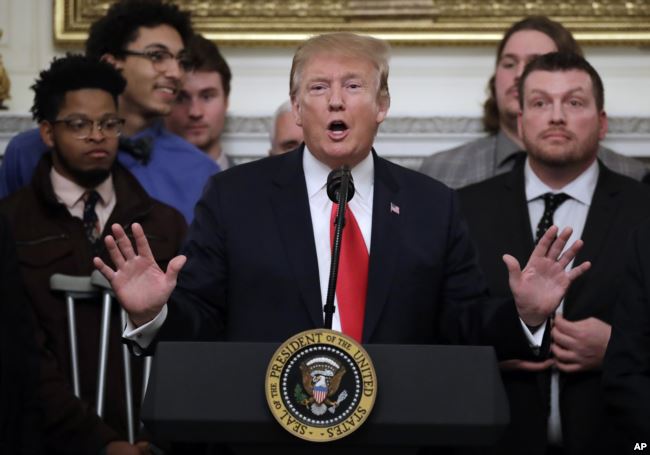 WASHINGTON — Democrats in the U.S. House of Representatives launched a wide-ranging investigation Monday of President Donald Trump’s 2016 campaign, his businesses, his transition to power and whether as president he has obstructed justice to thwart probes of him.

The House Judiciary Committee sent letters to 81 people and entities linked to Trump, demanding documents within two weeks about a lengthy list of events involving the country’s 45th president. In addition to focusing on obstruction allegations, the committee said it is looking at possible public corruption and abuses of power during the two-year Trump presidency.

“Over the last several years, President Trump has evaded accountability for his near-daily attacks on our basic legal, ethical and constitutional rules and norms,” Congressman Jerrold Nadler, the panel’s chairman, said in announcing the investigation.

“Investigating these threats to the rule of law is an obligation of Congress and a core function of the House Judiciary Committee,” he said.

Trump has long denied wrongdoing involving his campaign’s links to Russia and during his presidency. Asked about the Nadler investigation on Monday, Trump replied, “I cooperate all the time with everybody…You know the beautiful thing — no collusion. It’s all a hoax.”

The White House said its lawyers and “relevant White House officials” would review the Judiciary Committee’s demand for documents and “respond at the appropriate time.”

Aside from the White House, the panel sent its requests for documents to the Justice Department; senior campaign officials; the Trump Organization, the president’s global business empire, and his two oldest sons, Donald Trump Jr. and Eric Trump.

Nadler said Sunday he believes the president has obstructed justice. He said that Trump’s former long-time personal lawyer, Michael Cohen, in his lengthy public testimony to Congress last week, “directly implicated the president in — in various crimes, both while seeking the office of president and while in the White House.”

“We don’t have the facts yet,” Nadler said. “But we’re going to initiate proper investigations.”

The information gathered by the Judiciary Committee, along with that in the yet-to-be-released report by special counsel Robert Mueller’s investigation of Trump campaign links to Russia and obstruction allegations, could form the basis of impeachment proceedings against Trump. But Nadler said talk of trying to remove Trump from office is premature.

“We will act quickly to gather this information, assess the evidence and follow the facts where they lead with full transparency with the American people,” Nadler said.

Cohen, who called Trump “a racist, a con man, a cheat,” showed a House panel two $35,000 checks sent to him — one signed by the president and one signed by Donald Trump Jr. and Allen Weisselberg, the Trump Organization’s chief financial officer.

Cohen testified the money was intended to partly reimburse him for $130,000 he paid shortly before the 2016 election to adult film star Stormy Daniels as hush money, to keep her quiet about an alleged affair she claims to have had with then real estate mogul Trump more than a decade ago.

Sen. Mark Warner, the top Democrat on the Senate Intelligence Committee, told CNN that after hearing Cohen’s testimony, “We’ve got to dig deeper” about the extent to which Trump pursued construction of a skyscraper in Moscow during the 2016 campaign even as he told voters he was not involved in any Russian business deals.

Warner said he will reach his decision on whether Trump colluded with Russia to help him win the election after more investigation. But he said, “The claim that there is no evidence is factually wrong.”

Mueller’s report could be turned over to Attorney General William Barr in the coming days, but how much of it will be made public is uncertain. Democratic lawmakers have called for its full release, but Barr has said he would only do so to the extent that Justice Department regulations allow him to.

Trump, since returning from his collapsed summit in Hanoi last week with North Korean leader Kim Jong Un, has resumed his Twitter attacks on Mueller’s investigation and the growing number of inquiries in Congress.