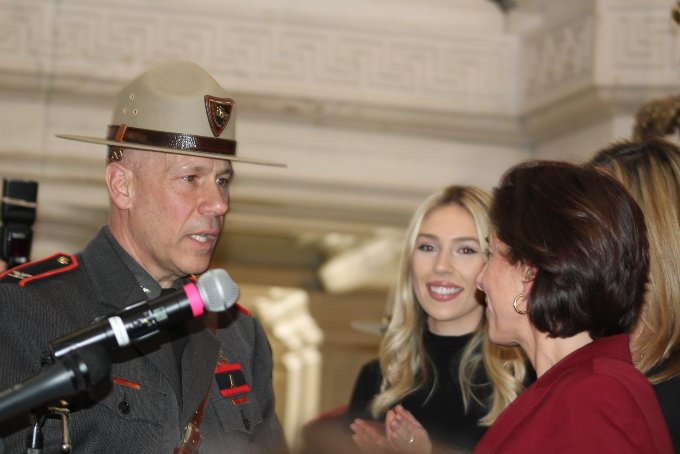 “It is truly an honor and a privilege to be chosen as your Superintendent,” Colonel Manni said. “My goal is to serve with courage, commitment, integrity and respect, always striving to attain the exceptional levels of public service provided by each of the 13 men and women who have served in this role before me.”

“Colonel Manni has dedicated his career to public safety and service, and I’m confident that he will lead the State Police with integrity,” said Governor Gina M. Raimondo. “I congratulate Colonel Manni and his family on this well-deserved honor and I look forward to working together in the years ahead.”

Colonel Manni assumes command after a long and respected career in public service, including 25 years with the Rhode Island State Police, retiring in 2015 as Major, the fifth highest-ranking member of the command staff. He was then appointed as Director of Operations, Safety and Security for the Rhode Island Turnpike and Bridge Authority before being selected as Town Manager for the Town of Narragansett in 2016. On December 27, 2018, Governor Raimondo named him to succeed Colonel Ann C. Assumpico, who announced her retirement from the post effective January 19, 2019.

Congressman David M. Cicilline and Congressman James Langevin were among the many federal, state and local officials who attended, along with dozens of top law enforcement officers from throughout New England, including top command staff members from the Connecticut and Massachusetts State Police.

The stairs leading to the House and Senate galleries were filled with scores of uniformed State Troopers, members of the current State Police Training Academy and local police officers representing several departments throughout the state. The overflow crowd spilled onto the lower steps and along the upper balcony, where a State Police Color Guard stood.

Colonel Manni’s wife, Tracey, and daughter, Olivia, sat with him during the ceremony, with other family members, friends and supporters nearby and in the audience. The event also was live-streamed on Facebook, so it could be seen by Colonel Manni’s son, 2LT James C. Manni, a West Point graduate and U.S. Army officer scheduled to deploy with the 1st Armored Division to Korea imminently.

“I am deeply committed to ensuring that every trooper, every barracks and every unit within this agency is properly trained, equipped and prepared to provide an unparalleled level of public service and protection to the citizens of Rhode Island,” Colonel Manni said, “and I vow to uphold the honor, traditions and values that continue to make the Rhode Island State Police one of the finest and most respected law enforcement agencies in the United States.”