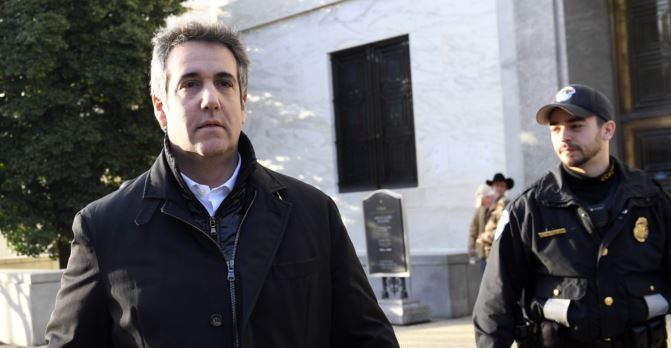 WASHINGTON — In what promises to be a riveting and historic televised hearing, Michael Cohen, President Donald Trump’s former long-time personal lawyer, is set to appear before a House oversight panel Wednesday to provide an intimate look at the Trump business empire. Cohen will become the highest-profile witness since the 1970s Watergate scandal to testify in Congress against a sitting American president.

Cohen’s tell-all public testimony providing potentially damaging evidence about Trump’s political and business activities both before and after his 2016 presidential victory will come while the president is in Hanoi for his second summit with Kim Jong Un to try to persuade the North Korean leader to dismantle his country’s nuclear weapons program.

The last time the U.S. witnessed anything like this was in 1973 when John Dean, the former White House Counsel, delivered a dramatic testimony that implicated President Richard Nixon and others in a cover-up effort in the Watergate affair. A year later Nixon became the first American president in history to resign.

The disgraced attorney pleaded guilty to lying to Congress once before and will have his work cut out to persuade lawmakers he is telling the truth this time. In all, Cohen will appear before three committees this week, including two behind closed doors.

While not a White House insider with the power to bring down a president, Cohen, 52, was intimately involved with Trump’s business interests, 2016 campaign, and inauguration committee — an intersection of activities under investigation by federal prosecutors in New York. Some of Trump’s allies, such as former senior White House strategist Stephen Bannon, view these probes as posing a greater threat to Trump’s presidency than the special counsel’s investigation of Russian meddling in the 2016 presidential election and possible collusion by Trump and his aides.

As executive vice president for the Trump Organization and personal lawyer to Trump for nearly 10 years, up until a couple of months after the election, Cohen made deals and put out fires for his celebrity tycoon boss.

So loyal was he to Trump that he once said he would take a bullet for the celebrity businessman. But the relationship deteriorated last April after the FBI raided Cohen’s office, home and hotel room to seize documents related to the Daniels hush money and other alleged crimes and Trump distanced himself from his beleaguered attorney. By July, Cohen’s lawyer, Lanny Davis, was saying publicly that Cohen had decided to “hit a reset button” in his relationship with Trump and resented being a “punching bag” for the president.

Facing a lengthy prison sentence, Cohen then struck a deal with prosecutors. In August, he pleaded guilty to eight criminal charges, including campaign finance violations in connection with the payments to Daniels and McDougal. In December, he pleaded guilty to one count of lying to Congress about the Trump Organization’s efforts to negotiate a deal to construct a Trump Tower in Moscow during the 2016 presidential campaign. In return, he received a three-year prison sentence. He’s scheduled to report to prison in early May.

As part of his plea agreement, Cohen is continuing to cooperate with federal prosecutors in New York who are investigating Trump’s business interests and millions of dollars of donations made to his presidential inaugural committee. Cohen was a fundraiser for the committee.

However, as a convicted perjurer, Cohen must convince many of the same lawmakers he lied to that he is telling the truth this time.

Cohen’s testimony before the House Oversight and Reform Committee is one of three appearances he makes before lawmakers this week. He is also scheduled to testify before the Senate and House intelligence Committees on Tuesday and Thursday respectively. But those hearings will be held behind closed doors.

Last week, Rep. Elijah Cummings of Maryland, the Democratic chairman of the House oversight panel, told committee members that Cohen will not be asked about Russian interference in the 2016 election and alleged collusion between Trump campaign associates and Moscow. That questioning will be left to the intelligence committees, which are following the trail of Special Counsel Robert Mueller’s two-year probe of Russian meddling in the 2016 election.

Instead, the oversight committee hearing will focus on hush money payments made on behalf of Trump, Trump’s business practices as well as his compliance with campaign finance laws, tax laws, financial disclosure requirements and conflict of interest laws governing Trump’s government and private business practices, Cummings wrote in a memo to committee members. Other potential lines of questioning include the accuracy of Trump’s public statements, allegations of fraud by the now-defunct Trump Foundation, and “efforts by the President and his attorney to intimidate Mr. Cohen or others not to testify.”

Cohen postponed previously scheduled testimony on Capitol Hill, citing concern about threats by Trump and his lawyer against Cohen and his family.

While Congressional Democrats are eager to elicit damaging information about Trump’s business practices and involvement in authorizing the hush money payments, Republicans and Trump allies are certain to denounce him as an admitted liar whose testimony cannot be trusted. And with many of the issues on Cummings’s list under active investigation by prosecutors, Cohen may not be able to respond to some questions in public.

Republican Congressman Jim Jordan of Ohio, the ranking member of the House Oversight Committee and a staunch Trump ally, said he was disappointed that the committee chairman’s first major hearing will feature Cohen as “phase one of the Democrats’ coordinated campaign to remove the president from office.”

“Mr. Cohen cannot be trusted to partake in honest fact-finding before our body,” Jordan said in a statement last week. “He’s said so himself – to a federal judge – when he [pleaded] guilty to lying to Congress.”

But Democrats say the prison-bound Cohen has little incentive to lie. Rep. Adam Schiff of California, the Democratic chairman of the House Intelligence Committee, said he wants to know why Cohen lied when he first appeared before the committee a year ago and who was aware that he was going to deliver a false testimony.

“We think he has a lot to offer,” Schiff said on ABC’s “This Week” program on Sunday.

As for Cummings, the House oversight committee chairman, he says he plans to run “a fair hearing “like a judge.”

“I know the Democrats are going to be lashing at him, I know the Republicans are going to say, why should we believe you today?” Cummings told a local television station in Baltimore. But I think, me being in the middle, trying to keep them on a higher realm, we’ll get there.”