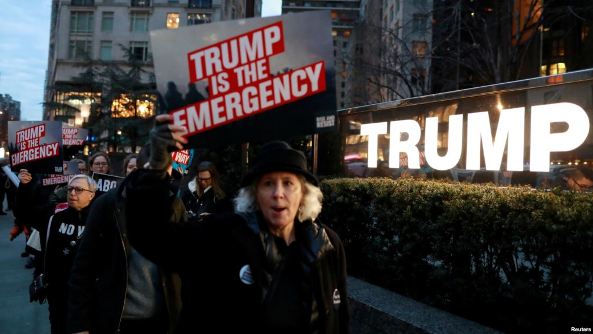 WASHINGTON — President Donald Trump’s decision last week to declare a national emergency related to the security of the Southwest border has created confusion and concern on military bases across the country, which could be facing unexpected cuts in funding for major construction projects and drug interdiction programs.

In all, the White House is planning to use authority given to the president in times of national emergencies to redirect $6.1 billion from the Pentagon’s budget to help fund more than 320 kilometers (200 miles) of the wall the president has promised to build on the southern border to stanch the flow of illegal immigrants and drugs. The money would come from the military construction budget ($3.6 billion) and a Department of Defense drug interdiction fund ($2.5 billion.)

The military construction budget, in particular, is a tempting target for the administration, but tapping into those funds is politically fraught. Unlike other money appropriated by Congress, which must be spent (or “obligated,” in budget-speak) in the year it is authorized, military construction funds can be spent over a period of five years. This means there are billions of dollars sitting in Pentagon accounts right now that haven’t been officially spent.

Redirecting that money to other purposes will have painful real-world effects on communities across the country that were expecting — even depending on — those funds being spent on contracts with local construction firms and other service providers. And all of those communities have members of Congress who carefully monitor federal spending in their districts, many of whom pride themselves on delivering such projects to their constituents.

In Kentucky, for example, more than $140 million in funding was on the books for Fiscal 2019, according to Department of Defense budget documents. That includes a $62 million project to fund a new middle school for the children of service members at Fort Campbell.

“[T]hese are military families,” he said. “These are the kids of our soldiers, probably some of whom are at the border right now enforcing Donald Trump’s fallacious strategy.”

In Ohio, where construction, among other things, was expected to begin on a new intelligence production complex at Wright-Patterson Air Force Base and a new machine gun range at the Army National Guard’s Camp Ravenna, federal funding is now in doubt.

Ohio Republican Congressman Mike Turner, who said in a statement that he generally supports the president’s border strategy, nevertheless added, “I strongly believe securing our border should not be done at the expense of previously funded military construction projects.”

In Texas, home to Republican Congressman Mack Thornberry, the ranking member of the House Armed Services Committee, more than $250 million allocated for military construction projects, including infantry training grounds and medical facilities, is suddenly in question.

Thornberry also said in a statement that he generally supports the president’s goals at the border, but like many other members of Congress, he balked at taking the funds from the military. Doing so, he said, will “undercut one of the most significant accomplishments of the last two years beginning to repair and rebuild our military.”

Because of rules governing the federal appropriations process, money that has been “obligated” through a federal contracting process cannot be taken back by the administration, so contracts in effect before the declaration of a national emergency will not be affected.

The confusion surrounding what impact the move would have on military facilities was only made worse by conflicting signals from the administration.

In a Rose Garden appearance in which he announced his plan, Trump suggested that he had identified programs that would lose funding. He said that he had spoken to unnamed “generals” who told him they believed the border barrier to be more important than other projects to which funds had been allocated.

The president himself seemed to say that he had been made aware of programs that could be cut, adding they “didn’t sound too important to me.”

A day later, however, Acting Defense Secretary Patrick Shanahan told Reuters that he would be meeting with service chiefs to identify projects that would lose funding in order to accommodate the administration’s plans.

As of Tuesday morning, a staff member on the House Armed Services Committee said that Congress had still not been made aware of the programs that would be cut to make funding available for the border wall.

Trump’s decision to declare a national emergency has provoked a complex set of reactions from members of Congress.

Many Republicans, including senior figures in the Senate such as Majority Leader Mitch McConnell of Kentucky and Senate Judiciary Committee Chairman Lindsey Graham of South Carolina, have expressed support for the declaration, saying they agree that the situation on the border amounts to a crisis.

Even among Republicans who are generally sympathetic to Trump’s insistence that a wall is necessary on the Southwest border, his chosen method of funding is the problem.

The U.S. Constitution specifically grants Congress the sole ability to authorize federal spending, and for more than two years, Congress has specifically refused to provide the president with funding for a border wall. A number of Republican lawmakers are unhappy at what they see as an attempt to end-run the legislative branch.

Across the aisle, Democrats have been almost uniformly dismissive of the president’s calls for a border barrier and are even more united in their opposition to his use of emergency authority to fund it.

Democratic Congressman Joaquin Castro of Texas announced Tuesday that he had secured 78 co-sponsors for a proposed Joint Resolution terminating the president’s emergency declaration. If Democrats are able to pass the resolution in the House, it would force the Republican-controlled Senate to vote on the bill as well.

This would, at the very least, force many Republican senators to go on the record as supporting or opposing Trump’s actions.

If it were to pass the Senate — not impossible, given the number of Republican lawmakers who have said they are opposed to the state of emergency declaration — President Trump would still have the ability to veto it.

« ‘Trump’ and ‘Kim’ Go Head-to-Head at Hanoi Hair Salon
Congress Could Block Trump’s Emergency Declaration, But It Wouldn’t Be Easy »