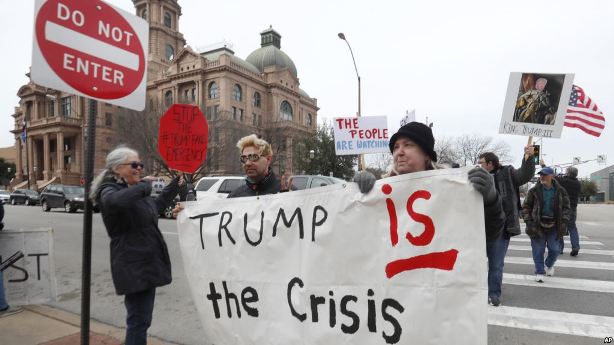 Three new polls in the U.S. show that a majority of Americans oppose President Donald Trump’s declaration of a national emergency to build a wall along the country’s southern border with Mexico without congressional authorization.

In the latest survey released Wednesday, a Politico/Morning Consult poll showed Americans were opposed to Trump’s action by a 51-39 percent margin.

But as is often the case in polls about Trump’s actions, there was a sharp political divide in the survey results. Trump’s emergency declaration drew 77 percent support from fellow Republicans, with 18 percent opposed. A total of 81 percent of Democrats voiced opposition, while 52 percent of independents said they were opposed.

A HuffPost/YouGov survey found a 55-37 percent margin against the president’s emergency declaration, again with the president’s supporters overwhelmingly favoring and Democrats opposed.

It said Democrats opposed Trump’s action by a 94-6 margin, while Republicans favored it by 85-12. Independents opposed the declaration by a 63-33 margin. 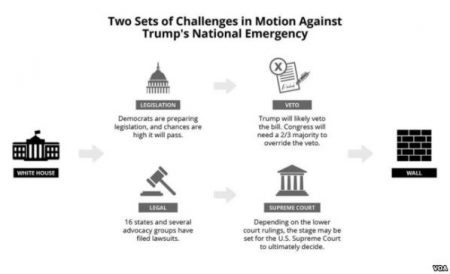 Sixteen states, landowners along the border and an environmental group have sued Trump to try to keep him from carrying out his plan to tap $8 billion in government funds now allocated for other purposes to build more than 320 kilometers of wall along the 3,200-kilometer U.S.-Mexican border.

Trump says the wall is necessary to thwart illegal migrants from entering the country and to interdict drug shipments. Congress last week approved $1.375 billion in new spending for barriers along the border, but none specifically for a wall.

In declaring the national emergency, Trump last week said he didn’t need to do it, but wanted to move faster to build the wall than with just the barrier funding approved by Congress.

He asserted Tuesday he had an “absolute right” to declare a national emergency to build a wall without congressional approval of funding for it.
Trump says he expects to lose some of the initial court cases filed against his declaration but ultimately prevail with a favorable ruling by the Supreme Court, reversing the lower court decisions.

The multi-state lawsuit against the national emergency declaration was filed in the western state of California, the country’s most populous state, where opposition to Trump runs strong. Judges there have often overturned other Trump initiatives during his 25-month presidency. But the U.S. leader said at the White House, “I think we’re going to do very well with the lawsuit.”

The states’ complaint alleges Trump’s emergency declaration is illegal and unconstitutional, and harms the states and their residents by taking money away from anti-drug programs, military construction projects and other law enforcement efforts. The lawsuit asks the court to permanently prohibit the Trump administration from diverting the funds from elsewhere in the government, or to build a wall without Congress appropriating money for that purpose.

California state Attorney General Xavier Becerra accused Trump of engaging in “theater” and hyping a crisis because he failed to get Congress or Mexico to pay for the wall, a favorite campaign vow of Trump during his successful 2016 run for the presidency. Trump’s emergency declaration has been met by a number of other lawsuits, including from Texas landowners who could see the wall go through their property.

On Tuesday, the American Civil Liberties Union filed a suit on behalf of the Sierra Club and the Southern Border Communities Coalition arguing the president failed to meet the requirements to declare a national emergency.

In fact, there was and is no national emergency to justify the president’s action, only his disagreement with Congress’s duly enacted decisions on the extent and pace of spending on the border wall,” the lawsuit says. Another group, Citizens for Responsibility and Ethics in Washington, also filed a suit seeking documents about the Trump administration’s legal reasoning for declaring the emergency.

« Trump to Nominate Jeffrey Rosen as Deputy Attorney General
Once a Dirty Word in US Politics, Socialism is Making a Comeback Among Democrats »