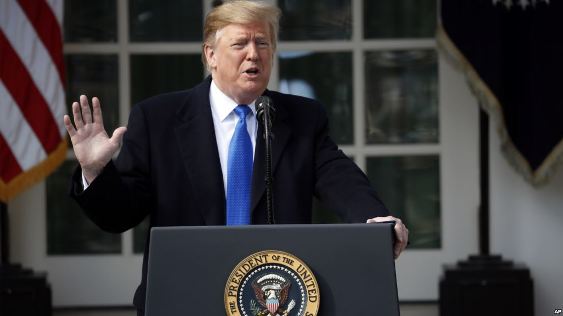 WHITE HOUSE — President Donald Trump has declared a national emergency, bypassing Congress to build a wall along the southern U.S. border, and setting up a legal challenge that could help determine the limits of U.S. presidential power.

Warning against what he called “gang monsters” and an “invasion” of drugs and crime, Trump said the emergency declaration was a “great thing to do.”

At one point, Trump mentioned “monstrous caravans,” an apparent reference to the repeated groups of Central American migrants that have attempted to reach the U.S. during his presidency.

“We are talking about an invasion of our country,” Trump said. “With drugs and human traffickers and all types of criminals and gangs.”

Trump’s attempt to plow ahead with a wall, his main campaign promise, is likely to please the president’s conservative political base. But it also intensifies accusations Trump is abusing his emergency powers.

Trump says he will also sign a bill to fund the federal government. Congress reached the compromise bill in an attempt to end the partisan deadlock that had led to a recent 35-day government shutdown.

The funding legislation gives Trump only $1.4 billion for a barrier along just 90 kilometers of the border — much less than the $5.7 billion he wanted to begin building 322 kilometers of wall.

But declaring a national emergency gives Trump the authority to move money from elsewhere in the federal budget and use it for a wall. In total, the White House will find roughly $8 billion to build the wall, White House Chief of Staff Mick Mulvaney said Friday.

While Trump’s decision ends the current battle over the budget, it potentially opens the door to much trickier legal challenges, which could delay wall construction for years.

Trump seemed to acknowledge that reality on Friday.

“Sadly, we’ll be sued. Sadly, it will go through a process. And happily we’ll win,” Trump said. “I hope.”

“The President’s unlawful declaration over a crisis that does not exist does great violence to our Constitution and makes America less safe, stealing from urgently needed defense funds for the security of our military and our nation,” the statement read.

“This is plainly a power grab by a disappointed President, who has gone outside the bounds of the law to try to get what he failed to achieve in the constitutional legislative process,” it added.

The president contends there is a crisis along the U.S.-Mexican border. He says only a wall can stop illegal immigration and crime, drugs and violent gangs.

Democrats say a wall would be ineffective against illegal immigration and expensive. Above all, many say there is no emergency at the border, accusing Trump of manufacturing a crisis.

A January poll from Quinnipiac University suggested that two-thirds of Americans are opposed to such an emergency declaration.

There are concerns Trump’s decision will set a precedent for future U.S. presidents to bypass Congress using national emergency declarations. According to the Constitution, Congress has the “power of the purse” – to tax and spend money for the federal government.

“If this is deemed to be a national emergency that it opens the door for all kinds of things to be deemed national emergencies just given the policy preferences of a president,” says Paul Schiff Berman, a law professor at George Washington University.

Presidents in both major U.S. political parties have increasingly used unilateral executive power to push through their policies. But this appears to be the first time a U.S. president has used Congressionally mandated emergency powers to force through such a politically divisive policy.