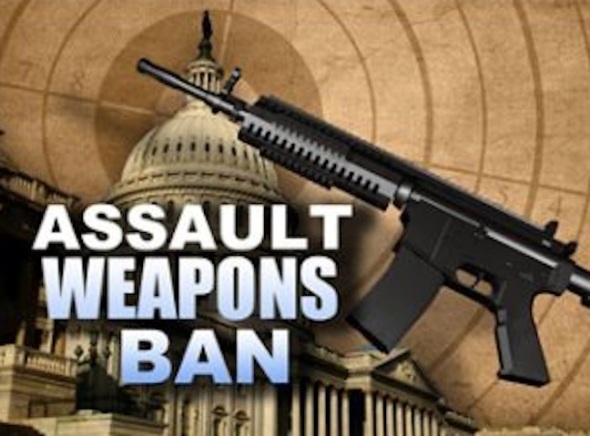 “Semi-automatic weapons with military-style features are designed for one purpose only – to kill as many people as quickly as possible,” said Cicilline, who is a Vice Chair of the House Gun Violence Prevention Task Force. “These are weapons of war. They do not belong in our communities. This bill will cut off the supply of new assault weapons that have been used to terrorize innocent men, women, and children across America.”

The Assault Weapons Ban of 2019 (H.R.1296) cracks down on the weapon of choice for would-be mass shooters in the United States. In recent years, assault weapons were used to massacre innocent victims at Marjory Stoneman Douglas High School in Florida, the Route 91 Harvest music festival in Las Vegas, Sandy Hook Elementary School in Connecticut, and a movie theatre in Aurora, Colorado.

“I’m proud to join in co-sponsoring Rep. Cicilline’s legislation to ban assault weapons,” said Majority Leader Steny Hoyer (MD-05). “In recent years, we’ve seen military-style assault weapons used in school and other mass shootings, taking the lives of innocent Americans throughout the country. This bill will take these deadly weapons off of our streets and make our nation safer. I thank Rep. Cicilline for his leadership on this issue, and I look forward to working with him to end the scourge of gun violence in our country.”

“Tragically, assault rifles have been the weapon of choice in our country’s deadliest mass shootings, including Parkland, Sandy Hook, Las Vegas, and Orlando,” added Congressman Ted Deutch (FL-22). “That’s because these weapons are designed to efficiently kill other humans. Assault rifles should not be so available and have no place in our community. Our laws are broken; it’s time to reinstate the assault weapons ban and end the insanity of allowing weapons of war on our streets.”

Specifically, the Assault Weapons Ban of 2019 prohibits the sale, transfer, production, and importation of:

The Assault Weapons Ban of 2019 is co-sponsored by 190 members of the U.S. House. It is endorsed by the American Federation of Teachers, Brady Campaign to Prevent Gun Violence, Center for American Progress, Coalition to Stop Gun Violence, March for Our Lives, Newtown Action Alliance, NoRA, and Everytown for Gun Safety.

“What better way to remember and honor the 17 innocent children and educators murdered last year at this time in their high school in Parkland — as well as the lives of so many others gunned down in mass shootings — by working tirelessly to reduce senseless gun violence and make our schools and communities safe,” said Randi Weingarten, who serves as President of the American Federation of Teachers, which represents 1.7 million members, including 130,000 health care professionals. “Military-style assault rifles like the ones this legislation bans belong in the military, not on the streets and in schools, where they can harm or kill countless number of innocent victims as the tragedies last year demonstrated. If other countries have solved these problems, so can the United States. This is why law enforcement, educators, parents and students are supportive of this legislation.”

“The risk of assault weapons is not a hypothetical one,” said Chelsea Parsons, vice president for Gun Violence Prevention at the Center for American Progress. “These weapons of war have been used to commit devastating acts of violence, both in high profile mass shootings that gain national attention and in daily shootings that too often go unnoticed. Assault weapons belong in war zones, not in our communities and this bill is a crucial step forward in making all of our neighborhoods safer.”

Kris Brown, President of the Brady Campaign to Prevent Gun Violence added, “One year after 17 innocent people were shot and killed in Parkland, FL, the need to get assault weapons off of our streets is as strong as ever. Weapons of war have no purpose in places of peace. We applaud Rep. Cicilline’s long-standing leadership on this important issue, and we will continue this fight until our communities are safe from this ever-present threat.”

“AR-15 semi-automatic assault rifles have become the weapons of choice for shooters who intend to inflict maximum damage,” said Coalition to Stop Gun Violence Executive Director Josh Horwitz.  “These guns have one purpose: to kill as many people as quickly as possible. They have no place on our streets. It is time for Congress to revisit a federal ban on semi-automatic assault rifles like the AR-15. Doing so will make our country safer and protect American lives.”

“If we want to prevent tragedies like those in Parkland, Las Vegas, Orlando, Sutherland Springs and Newtown, then we need to take a hard look at one of the deadliest common denominators in those shootings: assault weapons,” added John Feinblatt, President of Everytown for Gun Safety. “We applaud Rep. Cicilline for honoring the victims and survivors of gun violence with action.”

“A weapon that can be used to efficiently and brutally massacre 20 children and six educators in an elementary school do not belong in the hands of civilians,” said Po Murray, Chairwoman of the Newtown Action Alliance & The Newtown Foundation. “We have witnessed the devastation caused by one AR-15 and high capacity magazines in our community and it’s time for Congress to pass a federal ban on weapons of war to protect our children and our loves ones in our schools, places of worship, night clubs, concert venues, workplaces, movie theaters and other public venues. Assault weapons ban must be a part of a comprehensive strategy to end all forms of gun violence in our nation.”

“Assault weapons pose a unique threat in the broad spectrum of gun violence, both because they are so deadly and because they are designed to appeal to those who are most likely to use them,” said Ben Jackson, Co-founder of NoRA. “Congressman Cicilline’s important legislation will save lives.”