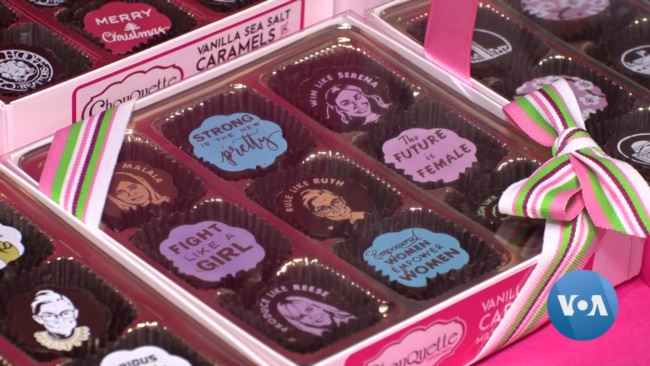 “When I was little I used to like to squish all the ones in the box to find the chocolate-covered caramels,” she says.

So in 2009, when she decided to leave a lucrative job in banking to spend a year in France, she had no idea it would give her an opportunity to channel that childhood passion.

A labor of love

While in Paris, she enrolled in Le Cordon Bleu culinary school where she learned the traditional art of chocolate and pastry making.

“Once I started making everything in the pastry area — from a croissant to a chouquette, I loved it!” Dwyer said. “And what I realized was that no one was making chocolate-covered caramels the way I loved them, in the United States — really good caramel, slow-cooked and then covered in the best chocolate.”

Once she was back in the U.S., Dwyer started making those European-inspired chocolates at night while she looked for a job during the day. And people “loved them,” she says. “Little by little I just grew, and had farm market stands and then stores started to be interested in wanting to carry them.”

Before long what started as a creative hobby became her full time job.

So in 2010, Dwyer started her own company, Chouquette, which in French is a term of endearment that technically means “little cabbage,” and is also the name of a sweet treat, similar in America to a small, ball-shaped doughnut.

“When you’re going to have something special like a chocolate-covered caramel you want the ingredients to be as real and natural as possible,” Dwyer says. “So we use great chocolate from Guittard in California — they’re Rainforest Alliance Certified, they are Fair Trade and non-GMO, and I think that’s important to people.”

Today, almost ten years later, Dwyer’s chocolates are in high demand. She sells them online and in about 200 stores throughout the U.S. She and her team still make them in small, individual batches, in 16 different flavors. Each has its own design, which is also made with all-natural colorants, and can be customized.

One of her most popular lines reflects iconic images of Washington, where she’s based.

“We took the five monuments that I love best in DC and made chocolates with those designs on top. And that was one thing that stores really responded to and so did people on my website.”

In addition to her online business and retail stores which sell her chocolates, Dwyer also likes working with corporate clients.

“One of the things that we do well is tell the client’s story on a chocolate,” she explained. “So if you’re a construction company we might add in vintage images of tools.”

An interior design client might get tables, chairs and lamp designs on their chocolates, while an accounting firm will get tiny tax forms on them.

“I think telling your story on a chocolate is much more effective as a client gift than five logos in a row,” Dwyer says. “When they give that product to their client, they’re connecting with not just our chocolate but they’re connecting to the business that made them.”

Another popular product line is a series she created that was inspired by powerful American women – aptly named “Phenomenal Women.”

“The Rule Like Ruth set outsold every single holiday design,” Dwyer explained. “We had stores in DC that we would deliver to, a hundred boxes, and they would sell out in two hours. It was crazy!”

But perhaps the sweetest — and most satisfying part of her business is her staff, about half of whom have a range of neurological issues. “They’re the best employees I’ve ever had,” Dwyer says. “It is absolutely not a charity, it is the best business decision I ever made.”

Gladys Martinez, 21, has been at Chouquette for three months and helps with production and packaging.

She says while having a disability makes things “a little challenging” for her, she’s grateful for Dwyer’s patience and understanding. “Overall I think it’s a great experience. Everyone here is very open, very nice,” she said, adding that she’s proud to be part of the chocolate-making process.

After almost a year on the job helping with packaging, Sam Trainum says working at Chouquette gives her a nice routine to follow, which makes her feel secure. “I don’t have to dread coming to work like I might somewhere else. It took me a few different jobs to land here, and I just really like it.”

Jonathan Turcios, 22, says working at Chouquette has been “a good three years of my life.” He enjoys making the caramel for the chocolates, and says after “getting into the groove of things,” and “understanding how Sarah wants things done,” things are easier for him, and “a lot more comfortable to work with people here.”

Dwyer believes hiring people with neurological differences – “or any other kind of differences” – “makes your business stronger in every single way.”

Dwyer’s clients range from upscale hotels and major airlines to county fairs and local food markets. But no matter who she’s making her signature chocolates for, Dwyer says she can’t imagine doing anything else.

“I love that I’ve created Chouquette where people feel really comfortable working here, but that people include us in their special occasions. So we might do graduation chocolates for you, we might do your wedding chocolates, and then we might do your baby shower chocolates. So being part of people’s whole life is really special to me.”

“We’re chocolate, we’re caramel, and we’re designs; but when you put them all together, it makes something magic.”