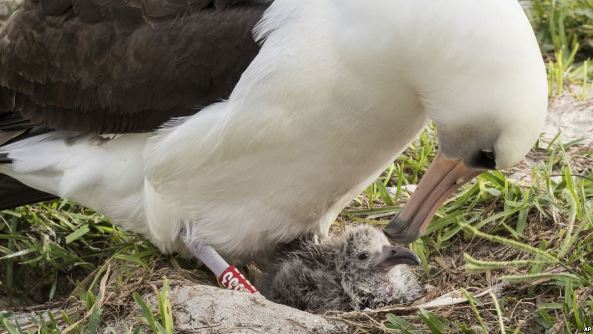 Wisdom is at least 68 years old and has raised at least 31 chicks, U.S. Fish and Wildlife Service officials said. Wisdom was first banded as an adult in 1956.

Wisdom and her mate, Akeakamai, have been returning to the atoll to lay and hatch eggs since 2006. Laysan albatrosses mate for life and lay one egg per year.

“She’s incredibly powerful as a symbol of why we do what we do and why people all over the world pay attention to her,” said Beth Flint, a Fish and Wildlife Service biologist. “Wisdom is rewriting history about our understanding of survivorship, how long birds live, and how often they breed.”

Albatross parents take turns incubating an egg for about seven months. Chicks fly out to sea about five to six months after hatching. They spend most of their lives flying over the ocean — feeding on squid and fish eggs.

Midway Atoll is home to about 3 million seabirds, including about 1 million albatrosses.

They return to the places of their birth to nest and raise their young, according to the Fish and Wildlife Service.

“Midway Atoll’s habitat doesn’t just contain millions of birds, it contains countless generations and families of albatrosses,” said Kelly Goodale, biologist at the refuge. “If you can imagine when Wisdom returns home she is likely surrounded by what were once her chicks and potentially their chicks.”