Trump Calls for Resignation of Congresswoman Accused of Anti-Semitic Comments 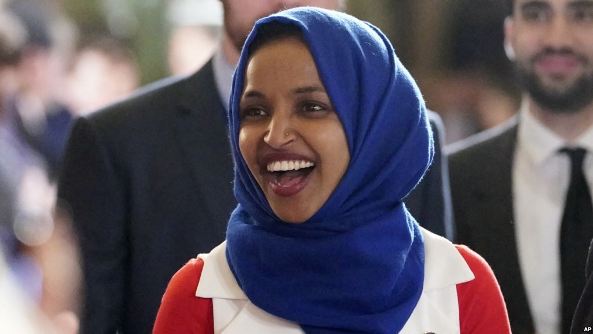 U.S. President Donald Trump has called for the resignation of Democratic freshman Congresswoman Ilhan Omar, who apologize Monday after drawing widespread condemnation from both Republicans and her fellow Democrats for comments deemed anti-Semitic.

The president told reporters Tuesday that Omar’s apology was “lame” and added, “She didn’t mean a word of it.” Trump called on Omar to resign Congress or at least resign from the House Foreign Affairs Committee on which she serves.

Omar, a Somali Muslim refugee who took office five weeks ago as a representative for the midwestern state of Minnesota, apologized Monday after drawing widespread condemnation from both Republicans and her fellow Democrats for comments deemed anti-Semitic.

Congresswoman Omar contended in a string of Twitter comments Sunday that a pro-Israel lobbying group in the United States, the American-Israel Public Affairs Committee, is buying off lawmakers to support the Jewish state.

She claimed the lawmakers’ support for Israel was being driven because of financial support from AIPAC, even though the nonprofit organization does not directly make campaign donations to U.S. politicians.

While the organization does not make campaign donations to U.S. politicians, AIPAC members can make individual contributions.

“It’s all about the Benjamins, baby,” Omar tweeted during an interview with a journalist, using slang jargon for $100 bills with the picture of a U.S. founding father, Benjamin Franklin, on the currency. Omar then tweeted “AIPAC!” when another user asked who she thinks is paying U.S. politicians to be pro-Israel.

After extensive criticism of her remarks, Omar said Monday, “Anti-Semitism is real, and I am grateful for Jewish allies and colleagues who are educating me on the painful history of anti-Semitic tropes. My intention is never to offend my constituents or Jewish Americans as a whole. We have to always be willing to step back and think through criticism, just as I expect people to hear me when others attack me for my identity. This is why I unequivocally apologize.”

She added that “at the same time, I reaffirm the problematic role of lobbyists in our politics,” whether it is AIPAC, the National Rifle Association or the fossil fuel industry. “It’s gone on too long and we must be willing to address it.”

Omar is a proponent of the BDS movement — Boycott, Divestment and Sanctions — to pressure Israel over its treatment of Palestinians, and has drawn attacks for her comments about Israel.

Before Omar apologized, the Democratic leadership in the House of Representatives, including Speaker Nancy Pelosi, said her “use of anti-Semitic tropes and prejudicial accusations about Israel’s supporters is deeply offensive. We condemn these remarks and we call upon Congresswoman Omar to immediately apologize for these hurtful comments.”

Pelosi tweeted that she spoke with Omar and that the two “agreed that we must use this moment to move forward as we reject anti-Semitism in all forms.”

House Republican Minority Leader Kevin McCarthy and other Republican lawmakers called on Democratic leaders to “take action” against Omar and a second Muslim congresswoman, Rashida Tlaib, a Michigan Democrat, for their criticism of Israel.

Congressman Peter King, a New York Republican, described Omar’s claims alleging AIPAC funding of U.S. lawmakers as “absolutely shameful. It’s immoral to be suggesting that somehow members of Congress are being paid off by Jews, by AIPAC. That goes right into the anti-Semitic bias, which has plagued the world for too long.”

Congressman Sean Patrick Mahoney of New York said, “My support for Israel is based on shared values and U.S. nat’l security, not money.” He said he was “disappointed” that Omar “is again tweeting dangerous and hurtful tropes.”

Another Democrat, Congressman Jim Himes of Connecticut, said, “It’s perfectly legitimate to criticize Israel or the pro-Israeli lobby. Just please be careful to do it in a way that can’t be interpreted as being anti-Semitic.”