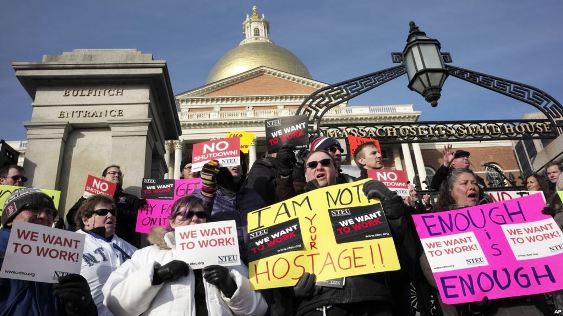 The partial U.S. government shutdown reached day 31 Monday with the Senate’s Republican leader preparing a vote on a proposal that President Donald Trump is calling a compromise and Democratic leaders say is a non-starter.

Trump’s plan would provide three years of protection against deportation for hundreds of thousands of immigrants who came to the country illegally when they were children, as well extensions of protected status for people who fled their countries due to violence or natural disasters.In return he would get the $5.7 billion in funding he wants for a wall at the U.S.-Mexico border.

Democrats object to the border wall as an ineffective and expensive security solution.They want Trump and Republicans to agree to reopen the government first and then discuss other border security initiatives.

Senate to vote on Trump proposal

Republican Senate Majority Leader Mitch McConnell said he plans to bring Trump’s proposal to a vote in his chamber in the coming days, although he will need some Democratic support to win approval.

In the House, Speaker Nancy Pelosi said she is planning votes this week on adding more immigration judges and money for scanning vehicles and drugs at the country’s ports of entry. The House has already passed multiple measures that would reopen the government, but McConnell has refused to bring them up in the Senate, saying he will not consider any bill that Trump would not support.

While the shutdown continues, about 800,000 government workers are either continuing their jobs without pay, or have been furloughed.

“Nancy Pelosi and some of the Democrats turned down my offer yesterday before I even got up to speak. They don’t see crime & drugs, they only see 2020 – which they are not going to win. Best economy!” Trump said on Twitter, referring to next year’s presidential election. “They should do the right thing for the Country & allow people to go back to work.”

Pelosi used her own post Sunday to reiterate to Trump the Democrats’ position.

“800,000 Americans are going without pay. Re-open the government, let workers get their paychecks and then we can discuss how we can come together to protect the border. #EndTheShutdown,” Pelosi said.

Democratic Rep. Nita Lowey, chairwoman of the House Appropriations Committee, said in a statement there is “simply no reason” for the shutdown to continue while the two sides “are engaged in a complex policy discussion.”

“Protecting Dreamers and TPS recipients is the right thing to do. The President is wrong to hold them hostage over money for a wasteful wall that could be better spent on more effective border security measures. The President’s trade offer — temporary protections for some immigrants in exchange for a border wall boondoggle — is not acceptable,” Lowey said.

Conservative critics of Trump’s plan said the protections against deportation amounted to amnesty for lawbreakers.

But Trump tweeted, “No, Amnesty is not a part of my offer … Amnesty will be used only on a much bigger deal, whether on immigration or something else.Likewise there will be no big push to remove the 11,000,000 plus people who are here illegally-but be careful Nancy!”

Republicans hold a 53-47 majority in the Senate, but major legislation in the chamber almost always requires a 60-vote majority. It is unclear if Trump will be able to convince at least seven Democrats to vote for his proposal.

Even if the Senate approves Trump’s plan, it would face defeat in the House. A Senate victory for Trump, however, could force new negotiations over his border wall plan and over reopening the government, as furloughed federal workers are set to miss their second paycheck next Friday.

State of the Union

As tensions over the border wall and the government shutdown continued unabated last week, Pelosi demanded Trump postpone his scheduled Jan. 29 State of the Union address before a joint session of Congress until after the government is reopened, submit it in writing to Congress or make the speech at the White House.Trump, in turn, postponed her fact-finding trip with other congressional leaders to visit U.S. troops in Afghanistan.

Trump had not directly responded to her call to delay the State of the Union speech until after the shutdown ends.

But on Sunday, he said, “Nancy, I am still thinking about the State of the Union speech, there are so many options – including doing it as per your written offer (made during the Shutdown, security is no problem), and my written acceptance. While a contract is a contract, I’ll get back to you soon!”