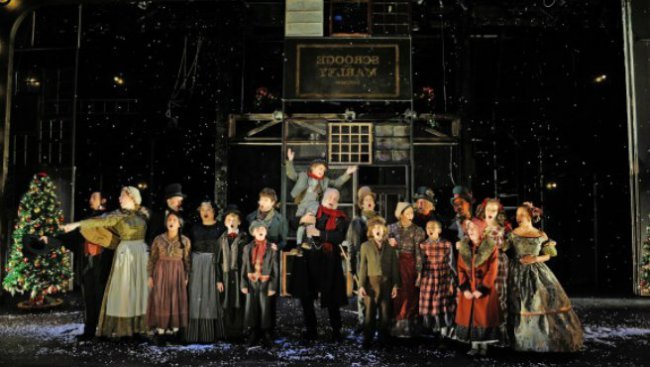 Production of A Christmas Carol featured over 1,000 Community Performers and raised over $57k for RI Community Food Bank

PROVIDENCE, RI: Trinity Repertory Company broke its all-time box office sales and attendance records
with its 2018 production of A Christmas Carol, surpassing the record set last year by the same show.
This season’s incarnation of the holiday tradition, which ran November 9-December 30, 2018, was the
41st consecutive mounting of the Dickens classic. Completely re-invented each season with a new
director, cast, and designers, the 2018 production was directed by Mark Valdez, who also directed
Fuente Ovejuna, or Like Sheep to Water at Trinity Rep in 2017. Beloved acting company member,
Stephen Thorne, played the role of Ebenezer Scrooge.

With this production, director Mark Valdez was inspired to bring Rhode Islanders together. “This show
means something to the state,” says Mark, “and it’s such a beautiful thing to me.” To do this, Trinity
Rep invited different choirs from around Rhode Island and Massachusetts to perform choral selections
as a part of each performance. With this impressive feat, Trinity Rep included over 1,000 community
performers from over 35 choirs in its production.

Additionally, Trinity Rep is pleased to announce $57,669.67 was raised for the Rhode Island
Community Food Bank from A Christmas Carol audiences. Since 2006, this tradition has been a part of
the theater’s commitment to its community and a reminder to audiences to bring the spirit of Dickens’
story into their lives and the rest of Rhode Island. This year’s collection brings the total raised over the
past twelve years to over $500,000.

“Trinity Rep’s A Christmas Carol is such a valued and popular holiday tradition in Southeast New
England, and this year’s production was glorious,” added Executive Director Tom Parrish. “Placing
community at the heart of the show, through both the choral performances and the money raised for
the Rhode Island Community Food Bank, really helped people get into the spirit of the season.”

TRINITY REPERTORY COMPANY
Rhode Island’s Tony Award-winning theater, Trinity Rep has created unparalleled professional theater
for and with its community since its founding in 1963. Trinity Rep strives to facilitate human
connection and has been a driving force behind the creativity that fuels and defines the region for
more than 50 years.

Trinity Rep is committed to reinventing the public square and inspiring dialogue by creating
emotionally-stimulating live productions that range from classical to contemporary and innovative
education programs for all ages and abilities. Its annual production of A Christmas Carol has brought
families together for 41 years and made memories for over a million audience members.

The 2018-19 Season includes Pride & Prejudice by Kate Hamill, black odyssey by Marcus Gardley, a
special limited-engagement of An Iliad by Lisa Peterson and Denis O’Hare, Macbeth by William
Shakespeare, The Song of Summer by Lauren Yee, Little Shop of Horrors with book and lyrics by Howard Ashman and music by Alan Menken, and José Rivera’s Marisol.